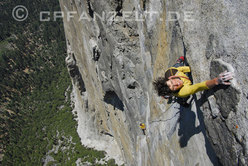 Hansjörg Auer on pitch 26 of El Nino, first climbed by Alexander and Thomas Huber in 1998. After two holds broke off, the "Eismeer" is now the crux and was freed by Iker Pou of Spain.
Photo by Christian Pfanzelt 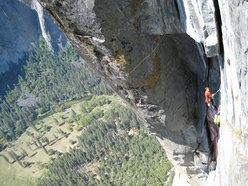 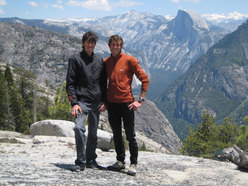 Hasjörg Auer and his brother Mathias on the summit of El Capitan. Half Dome is clearly visible in the background.
Photo by Auer archive

Five weeks climbing in Yosemite resulted in, amongst others, a repeat of El Nino (5.13d) on El Capitan.

Five weeks in Yosemite this spring resulted in a handful of interesting ascents for Hansjörg Auer and his brother Matthias. After spending some time at the Royal Arches and Cathedral Spires getting used to the rough granite, the two decided to tackle "Astroman", one of the finest cracks in the valley and the entire country. First freed by Ron Kauk in 1976 it remains a formidable challenge 30 years later: testament to this is the fact that Hansjörg on-sighted all but the crux Harding Slot pitch.

After a brief rest the two set their sights on "El Nino" (Alexander and Thomas Huber, 1998 5.13d), reputedly the most "euro-friendly" big wall on El Capitan. The two spent one day up to pitch five, then managed a three day push up to the top, during which Hansjörg on-sighted all but four pitches "Black Dike", "M&M-Flake", "Endurance Corner" and "Eismeer" were all redpointed second go.

Hansjörg then teamed up with the extremely strong (and surprisingly unknown) Much Mayr to climb The Nose. Swinging leads and climbing without jumars, the two Austrian mountain guides spent a mere 10 hours on the route, climbing mostly free except for aid on "King swing", "Great roof", "Changing corners" and on the bolt ladder final pitch.

Hansjörg wont't be forgetting his final day in America all to quickly. With his brother he escaped to Toulumne Meadows to climb Medlicott Wall's "Bacher/Yerian". At 5.11c the route is infamous for its long runouts and on the final pitch a chickenhead broke without warning causing Hansjörg to hurtle onto a small ledge and break his right ankle. The ensuing rescue proved long and, unsurprisingly, expensive. Potential USA holiday climbers take heed!

Despite this final setback Auer remains positive about his first valley trip. "Even if you're a 5.14 climber, when you come to Yosemite the first time you've got to get used to the cracks - they are very particular. But as you gain experience you realise that they're fantastic and I'd really not want to miss out on any of those awkward chimneys. The combination of a 1000m high granite rock face just 30 minutes from the café is unique. And Camp 4 is always great fun. Maximum respect to Lynn Hill for her redpoint ascent of The Nose which dates back to 1993 - although we didn't get a chance to try, the Changing Corners pitch looks rock hard. And maximum respect to Pete Croft too, who soloed Astroman in 1987." Words spoken by someone who knows a thing or two about solo ascents...