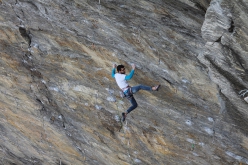 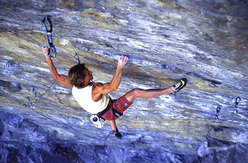 Ground Zero at Tetto di Sarre in Valle d'Aosta is fast becoming a route of "firsts." First ascended on 11 September 2002 by local hotshot Alberto Gnerro and hailed as the first 9a in Italy, in 2013 this climb became Stefano Ghisolfi’s first 9a and, in 2017, it also became Julia Chanourdie’s first 9a.

34-year-old Giuseppe 'Pippo' Nolasco recently repeated this power-endurance test and, in doing so, he has now climbed his first 9a. The redpoint comes after five 8c+: Vortex at Gajum, Alien Carnage at Castillon, L’Avaro at Tetto di Sarre, Noia at Andonno and SS 26 at Gressoney.

Nolasco recounted: "I tried Ground Zero for the first time in 2011, I immediately had good vibes and actually after a few weekends I fell off the last hold as I couldn't clip the chain. Then for years I didn't try it again, just one short session in 2017 and a more attempt in 2018. But after a great winter training, finally on 7 April I sent my first 9a, Ground Zero first ascended by Alberto Gnerro."