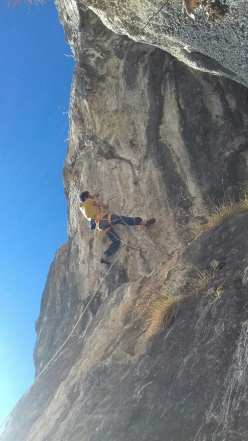 "Giuseppe 'Pippo' Nolasco isn't a name which we often come across, perhaps because he's a full-time plumber.." This is what we wrote in 2010, when Nolasco repeated SS26, an 8c+ freed in 2006 by Alberto Gnerro at Gressoney in Italy’s Valle d’Aosta. The 32-year-old has now repeated Riti Tribali, the route freed by Adam Ondra in 2009 in the crag Specchio del Grifone above Lecco, and repeated in the past by the likes of Stefano Carnati, Gabriele Moroni and Simone Pedeferri.

Last year I decided to climb more often at the crags around Lecco, and one of the reference routes in this area is obviously Riti Tribali. I knew nothing about the crag and the route, but after having watched the video of Moroni and Ondra and I couldn’t wait to try it.

At first glance the crag didn’t impress me much, but after climbing there I bit I realized that the limestone was top quality. I knew Riti Tribali didn’t suit my style of climbing, but nevertheless I put myself to the test and immediately did all the moves, apart from the crux which I failed to do even during all my attempts.

In total I needed 14 attempts spread out over 5 days. On my third go on 31 December I set off more concentrated than before and cruised through the crux without even thinking about it!