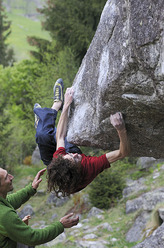 Adam Ondra bouldering at the Melloblocco 2008
Photo by Giulio Malfer 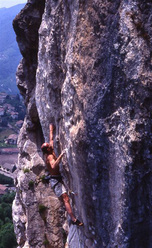 On 20 March 16 year old Adam Ondra made the first ascents of Riti Tribali 8c+ and Nonono 8c at Angelone, while on 21 March at Cornalba he repeated Les Sindacalistes 8c+ second go before onsighting Outsider (8a+). Adam Ondra's full report and thoughts about his Italian holiday.

Perhaps the news report should finish here with a prompt "no comment". Perhaps what Adam is up to speaks louder than words. But perhaps, if you take a step back, then the "dropped jaw" syndrome and that feeling of discomfort you get when faced with a phenomenon such as Ondra begins to change slightly. Yes, because it is Adam himself who teaches us that he is not a Martian who has suddenly appeared from nowhere. Rather, that there is a rich climbing history that precedes him and which he uses as a basis (like all climbers) to build on and perhaps even change the future of this sport.

But let's analyse things in the right order, following the splendid footsteps of Ondra at Angelona and Cornalba as well as those who preceded him and paved the way for this "dream" which all climbers have shared and which is now an incredible 16 years of age.

It all happened last weekend when Adam, returning from a climbing trip to France and Spain which netted him his nth 8c on-sight and second 9a+ redpoint, managed to find the time to check out Angelone above Lecco and the historic Cornalba above Bergamo. As usual he lost little time and on Friday he freed two projects at Angelone, both second go: Riti Tribali 8c+ and Nonono 8c at the Specchio di Grifone.

A day later Adam stood beneath Cornalba, the famous limestone mushroom high above Bergamo and repeated the historic Les Sindacalistes 8c+. First climbed by Beppe Dallona in 1995 after a nine-month affair, at the time the route was considered one of the hardest in Italy and unsurprisingly it had only been repeated by Cristian Brenna and Stefano Alippi. Adam sent the line second go (begin to notice the pattern?) then he produced what in some respects is the performance which struck us most: an on-sight of Outsider.

As some of our readers may well know, this route graded 8a+/8b had been first ascended by Simone Moro in 1989 when the mountaineer concentrated his energies on rock climbs instead of the 8000 Himalayam giants. It was subsequently climbed on-sight in an epic battle by Alberto Gnerro on 1 April 1990, almost a century ago some might argue, and more recently by a "certain" Manolo in 2006. When he heard the news Alberto confided: "About time, I'm happy. And both Sindacalistes and Outsider on the same day... yes, Adam is strong!" Yes. But to return to the start, to the history books and things viewed from a different perspective, then one can begin to think that the various Dallona, Brenna, Alippi and Gnerro, not to mention Manolo and the entire company of those who invented this new climbing game, were no less strong.


TWO DAYS CLIMBING AT ANGELONE AND CORNALBA
Hi, I must say I was amazed by Cornalba. I had heard many positive things about the crag, but the result was even better I had expected. Every route is outstanding. Old-school, technical climbing on small crimps. But what is the most important - there are many perfect lines still to be bolted and freed. That why I defined this as the crag of the future. And the crag with significant history as well.

Last Friday we spent in Angelone, about 20 minutes NW of Lecco. We met many locals who showed us a sector with a few projects still to be climbed. At first glance the crag doesn't look very nice and impressive, but the routes are much longer and harder than they look! I managed to make the first ascent of Riti Tribali 8c+, which is very special route for limestone. After about 8b climbing you get into a very strange crux on slopers and underclings, with the strangest slopers at the top that I've ever seen on limestone. At the end of the day I made another first ascent, Nonino 8c.

On Saturday it was time for Cornalba and Les Sindicalistes. I liked the route quite a lot. Yes, it is a bit chipped, but you have to admit it would be impossible if it hadn't been chipped. I also found it morphological, if I were 170 cm as 1.5 years ago I certainly wouldn't have sent it second go. Afterwards I tried to on-sight Zuper Mandrake 8c, unfortunately though I took a fall because I reached a hold with my left instead of right. Outsider was the dessert while the sun set. It must have been a great achievement when Alberto Gnerro did it 20 years ago! I think it is not a full 8b, but in any case it is not ideal to on-sight because of its hidden and not obvious holds."