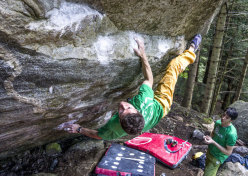 Stefano Ghisolfi has repeated the climb Ground Zero at Tetto di Sarre, Aosta. This is the first 9a for the strong climber from Turin.

Given his progression recently it was to be expected, but between expecting and actually doing something there's always a big question mark. Yesterday though 20-year-old Stefano Ghisolfi had all the answers: at the superbly steep Tetto di Sarre in Italy's Aosta valley he sent Ground Zero, the testpiece put up by Alberto Gnerro in 2002. So after several 8b+ onsights and his first 8c + at Tetto di Sarre a year ago, Ghisolfi can now celebrate his membership to the exclusive club of climbers capable of redpointing 9a.

The 9a milestone by Stefano Ghisolfi

For me this is an important milestone, as well as a psychological help for this year's competitions. There aren't many routes this difficult close to home, so I focused on this one. I tried the route over 3 days, the first time I got on it was two years ago, but I only had 2 sessions, more out of curiosity than anything else. A few months ago I returned to try it and I realised that it was possible, I fell off at above 3/4 height. Yesterday I went back to try it and I did it after 4 attempts, so 12 in total.

I honestly didn't expect to send it so soon; even though I knew that the route was within my reach, I thought I'd have to invest more time in it. To tell the truth it came about by chance, because it was raining on Sunday and Sarre is one of the few places where you can climb in heavy rain.

I'm currently training for the next competitions, the European Championship in Chamonix and the Lead World Cup. At the weekends I'll hit the crags where I hope to repeat and improve on this result.