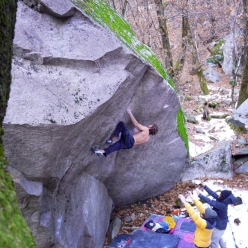 In early January at Cresciano in Switzerland Giuliano Cameroni made the first ascent of a long-standing project now called Crystal Ship. The 8C boulder problem has been repeated by Clément Lechaptois.

Giuliano Cameroni's clean-up campaign of long-standing projects continues at an unprecedented pace and at the start of January the 23-year-old Swiss climber added another gem to Cresciano with his first ascent of the obvious dihedral project at the sector La Boule.

Called Crystal Ship and graded 8C, the boulder has been described by Cameroni as a "Perfect clean line and a mix of power and technique combined in a difficult crux section." Cameroni worked the moves with Clément Lechaptois; the young French climber fell off the last moves three times on the day of Cameroni's send and then, after a day of rest, checked in the with first repeat.

09.11.2020
Giuliano Cameroni adds another dream line to Val Bavona
In Valle Bavona, Switzerland, Giuliano Cameroni has made the first ascent of a spectacular prow called Baba Yaga and graded 9a.