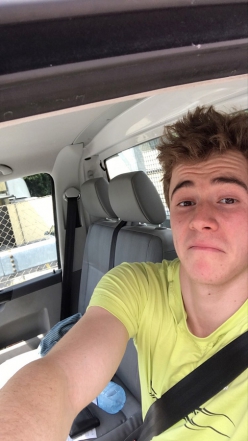 At Topside in South Africa,Giuliano Cameroni has made the first ascent of House of the rising sun, an 8B boulder problem the Swiss climber sent first go.

Earlier last month Switzerland’s Giuliano Cameroni made the first ascent of boulder he believes warrants 8B, House of the rising sun at Topside in South Africa. This in itself may not sound like big news and, for someone of Cameroni’s calibre, 8B sends are a regular occurrence.

What makes Cameroni’s ascent exceptional, however, is the fact that the block was an open project that had never been climbed before and that Cameroni freed iton his flash attempt; in all likelihood this is the first time an 8B problem has been freed first go.

Cameroni is evidently on fire and he immediately realised the boulder suited his style perfectly. Chad Greedy and Daniel brushed the rock, Cameroni then touched the crux crimp and when the temperatures dropped floated up for the first ascent. "Happens to be a great line as well" the 22-year-old told planetmountain.com.

Cameroni thanks SCARPA, prana, FrictionLabs for the support

“House of the rising sun” 8B Flash FA A perfect afternoon we walked up to this beautiful project above Art form. The crux is a big lock off from a crimp to a slopey jug. From the beginning I realized it suited me well, so I decided to give it a good first go and everything just worked out! Sykd @scarpaspa @prana @frictionlabs pic @tchadx

25.07.2017
Ned Feehally flashes 8B+ boulder in Rocklands
British climber Ned Feehally has flashed Trust Issues, an 8B+ boulder problem at Rocklands in South Africa. This is one of the hardest flash ascents to date.