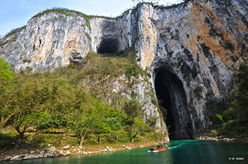 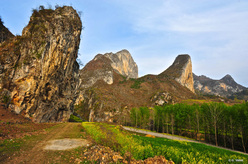 PORTFOLIO / gallery Portfolio: Getu and the Petzl RocTrip in China

Getu and the Petzl RocTrip in China

More than 250 new routes have been added to Getu in China for the Petzl RocTrip 2011 which kicks off officially tomorrow.

Every year Petzl organises its RocTrip, the climbing meeting open to everyone and which every year grows in importance. The formula is simple: choose a beautiful spot to go climbing, put up new routes of all grades, offer a series of courses and side events and climb as much as possible. "A muerte" is what someone who knows a thing or two about climbing as much as possible would say, namely Dani Andrada. Ah yes, and invite some of the best climbers in the world to take part in this sport climbing rendez-vous.

This year the chosen site is at Getu in China, discovered by French Mountain Guide Olivier Balma and then equipped last year. More than 550 climbers from all over the world are expected to take part and although the event kicks off officially tomorrow, some climbers have already jumped the gun and got some serious climbing done. Mickael Fuselier has ticked the first on-sight of "Lost in Translation" (7b+, 7c+, 8a+, 8a+) the first route bolted by Arnaud Petit last autumn, while the female trio Florence Pinet, Melissa Le Nevé and Nina Caprez quickly redpointed "Treblinka pour Diego" 8b.

If you want to check out the 250 new routes, many of which are beautiful multi-pitches, we recommend this impressive topo of the area.