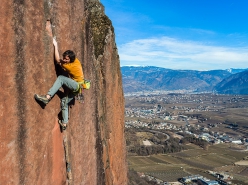 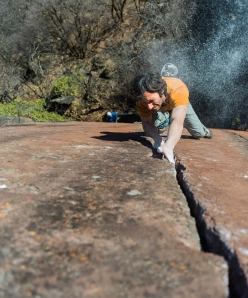 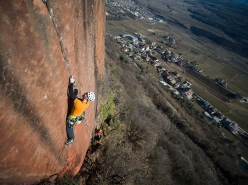 South Tyrolean climber Florian Riegler has made the first ascent of Skinwalker, a difficult single-pitch trad climb on the outskirts of Bolzano.

It was my brother who discovered the inconspicuous wall, barely visible from below. A little later we went to have a look. I could hardly believe it! "What a line!" I said to myself. And just 9 km from home! I absolutely had to climb this crack!

First I had to work and link the moves for this very technical climb. The combination of tiny Cams and the soft porphyritic rock at the start bottom gave me a hard time. Placing the pro was really difficult from some holds, I could barely hang on to the crack...

On 9 January I tried the crack again with Michele Caminati. It was bloody cold and the sun kept disappearing behind the clouds - it was becoming less and less pleasant. "I'll five it one last go," I told myself. I wanted to show Luigi, who was there to film me , at least some interesting moves. And completely unexpectedly I managed to free Skinwalker.

The 25 meters are 8a, maybe 8a+, I don't know exactly. But it doesn't matter, because as Michele says: "In this case, the route's beauty is far more important than its difficulty." A Kingline, just a stone's throw from home!

12.04.2016
Riegler brothers redpoint Pandora at Mandrea di Laghel, Arco
On Sunday 13 March 2016 Martin Riegler and Florian Riegler repeated Pandora, the route they had established in 2008 up the Mandrea di Laghel face above Arco, Italy. This recent climb may well be the route’s first free ascent.

26.06.2013
Cojote, new crack climb by the Riegler brothers
In May Martin and Florian Riegler made the first ascent of Coyote (100m, 7a max), a new crack climb up Pareti di Monticolo (Bolzano, South Tyrol), Italy.