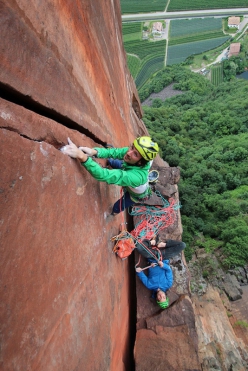 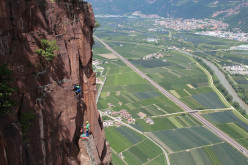 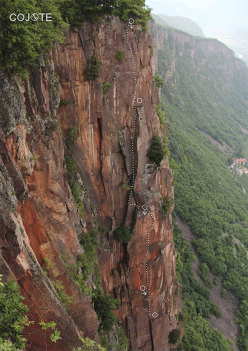 In May Martin and Florian Riegler made the first ascent of Coyote (100m, 7a max), a new crack climb up Pareti di Monticolo (Bolzano, South Tyrol), Italy.

For those who love crack climbs or for those who want to dabble in this style of climbing just a short distance from Bozen in Northern Italy, there's now a new route put up by the brothers Martin and Florian Riegler. Cojote, the route in question, is located on Pareti di Monticolo, clearly visible from the motorway A22 and circa 15 Km from Bozen and ascends solid red volcanic rock.

Cojote follows a series of beautiful cracks for 4 pitches (100m) and is broken only by a series of comfortable and airy belay ledges. While the climbing is never more difficult than 7a max, according to Florian Riegler it is always extremely beautiful. All belays are protected by bolts, while the pitches require a set of Friends for protection, above all mix-sizes. A 60m rope is sufficient, also for the abseil down the route, while the entire ascent should take 3 hours.

For those arriving from the south exit the A22 at in Egna - Ora, for those coming from the north exi at Bolzano Sud. Follow signs for Monticolo and turn off right before reaching Hotel Moser and reach a small parking lot. From here continue on foot up the forest road, through the woods, heading towards the rock face. Once you reach the height of the television antennas scramble to the rock face, calculate circa 30 minutes.

Coyote was first identified and cleaned by Martin Riegler in 2008 but then, also becuase no one thought it could be interesting, he failed to find other partners until last May when together with his brother Florian he made the first free ascent of this interesting crack line.

The route receives the shade and a fresh breeze in the afternoon, making it a great outing close to Bozen to sample the beauty of this style of climbing.