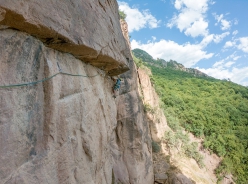 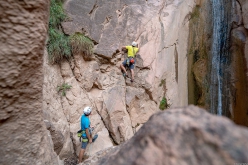 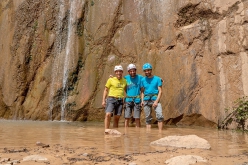 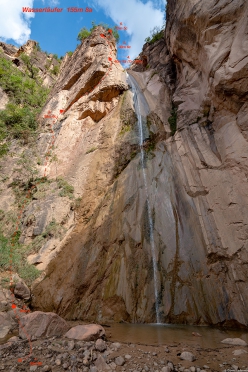 After Daniel had already inspected the approach and the wall for possible lines with Christian Auer in summer 2017, and after Martin Riegler took a closer look at the wall last spring, in summer Florian Riegler, Martin Riegler and I started to establish the new route next to the Margarethenbach waterfall.

It took a lot of time, effort and hard work to complete the first ascent, placing the bolts ground-up and carefully cleaning the pitches. In the end though we created a pleasant route in a great ambient; you often climb just a stone’s throw from the waterfall, which shouldn’t be underestimated.

We look forward to repeats, as these will clean the rock a bit more. The crux pitch can be protected better with medium-sized Friends or even aided.

The approach is relatively short. The route is located in the heart of the Adige Valley and is one of the few routes in the area that can be climbed almost all year round.

12.04.2016
Riegler brothers redpoint Pandora at Mandrea di Laghel, Arco
On Sunday 13 March 2016 Martin Riegler and Florian Riegler repeated Pandora, the route they had established in 2008 up the Mandrea di Laghel face above Arco, Italy. This recent climb may well be the route’s first free ascent.

26.06.2013
Cojote, new crack climb by the Riegler brothers
In May Martin and Florian Riegler made the first ascent of Cojote (100m, 7a max), a new crack climb up Pareti di Monticolo (Bolzano, South Tyrol), Italy.