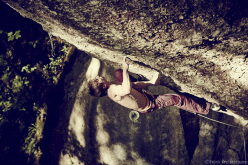 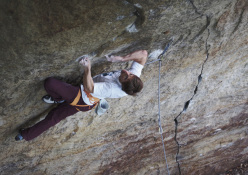 On 14/05/2015 Felix Neumärker repeated To tu jeste nebydlo 9a at Labak in the Czech Republic. Two days later he repeated Action Direct, the 9a first climbed by Wolfgang Güllich in Germany’s Frankenjura.

Last week Germany’s Felix Neumärker made two important repeats: Action Directe in the Frankenjura and To tu ještě nebylo in the Czech Republic, both graded 9a. While the former is probably the most famous sport climb in the world and consequently needs no further introduction (apart from pointing out that since Wolfgang Güllich first ascended it in 1991, the route has only been repeated 17 times, confirming its ‘solid’ grade) the repeat of To tu jeste nebylo probably needs further information.

The climb is a somewhat unusual 9a located on the Labak sandstone where first ascent ethics are still extremely rigid - read no new routing on toprope, no nuts and friends but instead threads and a good dose of courage. The route was first ascended by Ondra Benes, helped at a later stage by Adam Ondra who in March 2012 made the first free ascent. The country’s first XIIb, 9a, established ground-up… it’s easy to understand why this was considered a step forward for Czech sandstone climbing.

Alexander Megos checked in with the first repeat in June 2014 after various attempts with Neumärker who, this May, returned to close the chapter. The story couldn’t have ended in a better way, as Neumärker recounts that "it was beautiful that on the day I did it, my climbing partner happened to be the man himself, Ondra Benes. It was with him that I’d made my first attempts. All considered it’s a beautiful route, demanding right from the first move."