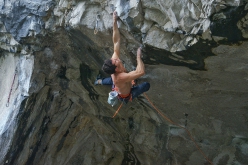 Austrian climber Eva Hammelmüller and Brazilian climber Cesar Grosso at the crag Massone in Arco, Italy, have repeated Underground, the 9a sport climb established in 1998 by Manfred Stuffer.

On Saturday 15 May one of the most burly routes in Arco, the famous Underground at Massone, was repeated by 20-year-old Austrian climber Eva Hammelmüller. Put up in 1998 by Manfred Stuffer, over the years the hugely overhanging line has become one of the most coveted tests in Europe, a sort of rite of passage for the strongest international climbers, with three distinct cruxes and particularly intense moves.

Last summer Laura Rogora checked in with the coveted first female ascent, and now Hammelmüller redpointed it after just 11 attempts spread out over 4 days. Her success comes after redpointing the 8c+ Tunnelblick at Achleiten in November 2020 and, in the Arco area in just one week last autumn, the routes Zero tolleranza (8c), Terra piatta (8b+/8c), Riflessi (8b+), Supermaratona (8b+), I Riflessi del Rosso (8b+) and Maratona (8b).

Cesar Grosso also successfully clipped the chains on Sunday. The Brazilian climber has been living in Arco since 2013 and last year he sent his first 9a, Pure Dreaming, just a little further to the left. The plan on Sunday was to try Reini's Vibes, but the route was wet so he decided to try his long-term project Underground once again, to work the moves he hadn't tried since last November. "I set off and much to my own surprise I sent it!" the 37-year-old told planetmountain.com. "Redpointing it on my first go of the year, after having tried it so much in past, wow, I really didn't expect that at all!"

19.07.2020
Cesar Grosso sends Pure Dreaming 9a at Arco
Brazilian climber Cesar Grosso reports about his first 9a, Pure Dreaming at Massone close to Arco. The 36-year-old has been living in Italy since 2013 and after competing for 23 years is now dedicating himself exclusively to climbing outdoors.