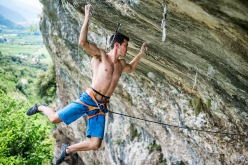 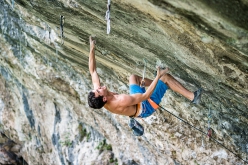 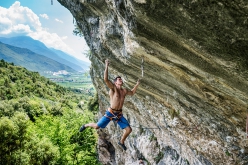 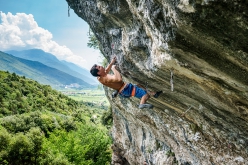 Brazilian climber Cesar Grosso reports about his first 9a, Pure Dreaming at Massone close to Arco. The 36-year-old has been living in Italy since 2013 and after competing for 23 years is now dedicating himself exclusively to climbing outdoors.

After a few weeks of attempts I finally sent my first 9a, Pure Dreaming at the widely overhanging sector Il Pueblo at Massone, Arco.

The route was bolted by Alfredo Webber in 2017 and freed by Adam Ondra in 2018. The first 5 bolts are shared with the classic Reini’s Vibes (8c/+), after which it continues directly upwards, to the left of Reini's. Just after this "junction" a kneebar allows for a good no-hands, before 14 really intense moves lead to the final crux. Exiting the roof us done via 6 very intense and physical moves, past distant holds and a huge swing controlled with a three-finger pocket a small crimp with your right hand. There’s a jug after the roof where the difficulties are over and, after a rest, you climb a 6c to the chain.

Conditions at Arco aren’t really ideal at the moment for a difficult project and for 3 days I arrived early, at 6 am, to climb in cool temperatures. The day I sent it I arrived early, too, but after falling off the last move I then did the actual redpoint later that afternoon. What a great feeling! After having competed for 23 years, now that I have just stopped taking part in climbing competitions I can dedicate myself 100% to rock climbing outdoors.

31.05.2020
Laura Rogora first Italian woman to climb 9a+, Pure Dreaming Plus at Arco
At the crag Massone in Arco, Italy, Laura Rogora repeated Pure Dreaming Plus, a 9a+ sports climb first ascended by Adam Ondra. The Roman climber is now the first Italian woman, and only the fifth woman in the world after Margo Hayes, Anak Verhoeven, Angela Eiter and Julia Chanourdie to climb 9a+.

27.05.2020
Laura Rogora climbs 9a once again with Pure dreaming at Massone, Arco
At Massone close to Arco in Italy Laura Rogora has redpointed Pure Dreaming 9a, while at Monte Colt she climbed the 8c’s Riflessi and Terra Piatta.