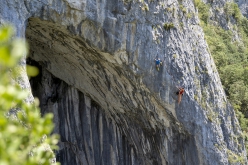 Eneko Pou and Iker Pou making the first free ascent of Jon (100m, 8b) at La Leze in Spagna. The 100m multi-pitch was first ascended by Rafael Heras and José Otxoa de Eribe in 1992
Photo by J.Canyi / Filmut.com 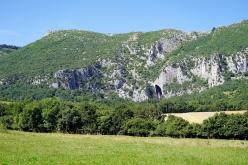 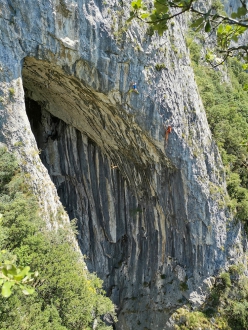 Eneko Pou and Iker Pou making the first free ascent of Jon (100m, 8b) at La Leze in Spagna
Photo by J.Canyi / Filmut.com

Across the La Leze arch in Spain Basque rock climbers Iker and Eneko Pou have made the first free ascent of the spectacular multipitch Jon, first ascended by Rafael Heras and José Otxoa de Eribe in 1992.

Generations of climbers have honed their skills on the imposing La Leze cave in the Álava region of Spain. One of the most spectacular routes at Cueva de la Leze crosses the entire arch and was first ascended in 1992 by locals Rafael Heras and José Otxoa de Eribe. Called Jon, the 5-pitch outing has now been freed by Iker and Eneko Pou who suggest difficulties in the region of 8b.

The ascent was of particular significane to the Basque brothers, as "We started climbing in this school at the beginning of the 90's, like all generations of Alava mountaineers before ours. People like Ángel Rosen, Juan Ignacio Lorente, Juanito Oiarzabal, Adolfo Madinabeitia, Atxo Apellaniz or Antonio Miranda, among many others, grew up among these rocks"

06.04.2020
Iker Pou, my ascent of Action Directe in Frankenjura 20 years ago
Spanish climber Iker Pou recalls his ascent 20 years ago of Action Directe, the Frankenjura masterpiece freed by Wolfgang Güllich in 1991. At the time, Pou’s ascent in autumn 2000 was only the second repeat after Alexander Adler and, nowadays just two decades ago, the route is considered one of the most famous and coveted sport climbs in the world.

14.03.2016
Iker Pou adds new 9a climb to Mallorca
39-year-old Basque climber Iker Pou has made the first ascent of Cleteropa Original 9a on the island of Mallorca, Spain

29.04.2015
Iker Pou frees Big Men 9a+ at Mallorca
Iker Pou, the 38-year-old Basque sports climber, has made the first ascent of Big Men 9a+ at Fraguel on the island of Mallorca, Spain

03.05.2011
Hardest of the Alps, the video of Iker and Eneko Pou's climbing quest
The video Iker Pou and Eneko Pou and their search for the hardest routes in the Alps and their meetings with some of the main players: Manolo, Alexander Huber and Beat Kammerlander.