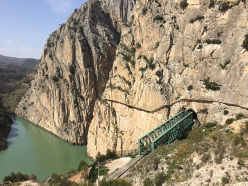 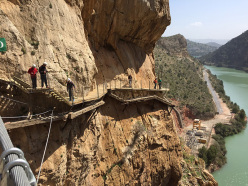 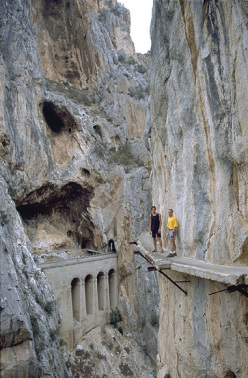 Last Saturday El Camino del Rey, the airy walkway that winds its way hundreds of meters above River Guadalhorce at El Chorro in Spain, was officially reopened. Three literally breathtaking kilometers, built at the start of the 20th century to provide access to the hydroelectric power station that served the needs of nearby Malaga. Over time this path - named in honour of King Alfonso XII - had fallen into disrepair and had become extremely dangerous, so much so that access was strictly prohibited.

The only people who still ventured along the path - unsurprisingly - were climbers who used it to access the beautiful crags located deep within the canyon Desfiladero de los Gaitanes. But even for climbers this walkway could be quite a scare…

After having been abandoned for 25 years, the Malaga town council decided to invest over 2 million euro in rebuilding what has often been described as one of the most spectacular paths in the world and now, in the week before Easter, the Caminito has officially been reopened.

Those who wish to walk along the path need to book in advance - 600 people/day are admitted - while in the future tourists will have to pay to access the path. As to the climbing, 70 routes (out of a total of 1800 at El Chorro) have been lost as they are located directly above the boardwalks. Climbers have free access to the climbs but need to show an official climbing license or club card.

For further information visit the official website www.caminitodelrey.info and also that of the Andalusian Climbing Club www.escaladoresandaluces.com