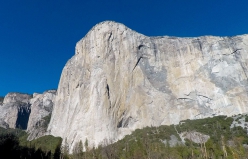 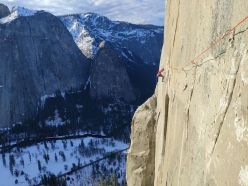 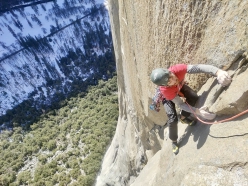 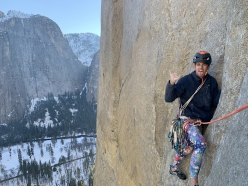 Belgian climbers Sébastien Berthe and Siebe Vanhee are currently attempting to climb The Dawn Wall on El Capitan in Yosemite.

Belgian climbers Sébastien Berthe and Siebe Vanhee are currently getting their bearings on Dawn Wall on the huge SE Face of El Capitan in Yosemite. First ascended over a period of 19 days from 27 December 2014 to 14 January 2015 by Tommy Caldwell and Kevin Jorgeson, and repeated from 14 to 21 November 2016 by Adam Ondra, the 1000m line is hailed as the hardest big wall climb in world.

Although this background is impressive to say the least,  Dawn Wall poses a gigantic physical, mental and logistical challenge unlike any other big wall they have climbed previously. The 32-pitch route checks in at 5.14d, or 9a max, but this number conceals so many other important factors that need to line up in order to be successful. The weather, for example, is a huge factor as Yosemite valley is often blasted by winter storms that mak conditions prohibitive, as Nalle Hukkataival unfortunately found out during his attempt in January 2020.

Berthe and Vanhee are supported by filmmakers and photographers Alex Eggermont and Julia Cassou, as well as Vanhee’s partner Maria Mayor. It is worth noting that to make the entire undertaking even more "spicy", Berthe, Eggermont and Cassou set foot on El Cap after having spent 25 days crossing the Atlantic Ocean in a 15m sailing boat with a group of friends.

At present Berthe and Vanhee have worked the lower half of the route, spending the first four days climbing up to pitch 14 before setting up a portal edge camp and spending the first two nights on the wall. Two days were spent trying the central crux pitches, the two traverse pitches and the famous Dyno pitch.

Commenting about initial progress on his Instagram account, Vanhee explained "We got to say how it is; we got our asses kicked! ;-) But nonetheless, we believe in the power of time, stubbornness and practice. Yosemite’s climbing is very particular, we both need some time to get used to the style and footwork. We were puzzled about the difficulty of getting our ropes up! And even more blown away about the great imagination Tommy Caldwell had to put this together. We can see how he bundled all his El Cap experience in one massive route."