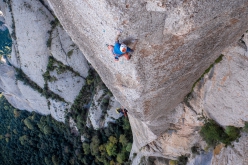 Edu Marín making the first free ascent of Arco Iris (200m, 8c+) at Montserrat in Spain on 9 October 2020 with his father Francisco Marín. The exposed line was first ascended in 1979 as an aid climb by Armand Ballart and German Folch
Photo by Esteban Lahoz 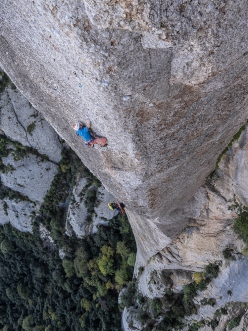 Spanish rock climber Edu Marin has made the first free ascent of Arco Iris, a 200m multi-pitch climb graded 8c+ at Montserrat in Spain, first ascended in 1979 as an aid climb by Armand Ballart and German Folch.

The impressive conglomerate walls of Montserrat saw their heyday during the 1970's and 1980's, but even now the area located about an hour west of Barcelona in Spain has lost little of its original appeal. Edu Marín has a special relationship with these unique towers as it is here that he started climbing and it is precisely here that he climbed his first 8a aged 13, his first 8b+ aged 14 and his first 8c aged 15.

Before embarking on the project Edu Marín received permission from Ballart to add additional bolts, since the original equipment was old and obsolete. Even with the new bolts the route results in a stern psychological test, with long obligatory runouts and falls in the region of 15 meters or even more.

The free version of Arco Iris is split into 6 pitches, with the 8b+ pitch 3 serving as a warm-up for pitch 4, a pumpy 8c+ and the crux of the entire route. Protected by a mere 4 bolts, this paves the way for the final two pitches graded 8b and 8a+ respectively. Marín bolted a direct exit on the last pitch, unlike the original line that diverted to the right, in order to reach the summit of Plàtan. For the Catalan, climbing straight to the top was the most logical way to finish the route.

Marín made the first free ascent on the 9th of October with his 68-year old father Francisco "Novato" Marín and has suggested 8c+. Should the grade be confirmed, this would make Arco Iris one of the most difficult multi-pitch climbs in Europe.

Edu Marin has repeated some of the hardest multi-pitches in the world but his real forte is without a doubt his hugely overhanging 380m 9a+ multi-pitch Valhalla on the Grand Arch at Getu in China, established ground-up by Marin and freed in 2019.

16.01.2014
Montserrat, Eneko and Iker Pou climb Tarragó, the route that no longer exists
At the end of November 2013 Iker Pou and his brother Eneko made the first free ascent of La Tarragó at Montserrat in Spain. The 240m line boasted difficulties up to 8b+ but subsequently the bolts were removed by unknown climbers and, as such, no longer exists.