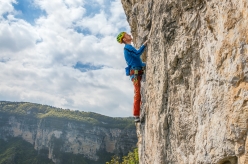 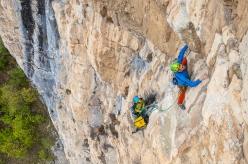 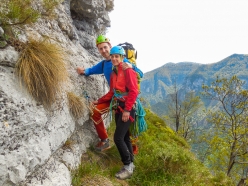 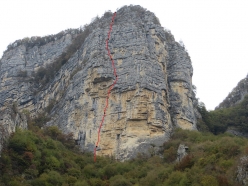 The West Pillar of Monte Spitz rises imperiously above the hamlet Giara Modon and guards the entire Canale del Brenta area. You cannot help but notice is sunny south face as you drive up through Valsugana.

Personally I’d never considered the idea of ​climbing a new route on a south face, because the best time of year for a venture of this sort is in winter and, during those months, either it’s sunny or you don’t climb outdoors. At least, that’s how I see things. Evidently my office life is making me lazy.

In any case, sunny days have to coincide with Saturdays or Sundays and in some extended periods of bad weather this rarely occurs. Having said that, this winter in NE Italy there wasn’t a drop of rain and so Angela and I took advantage of change in weather to establish a new route up this magnificent pillar.

We climbed a line suggested to us by Antonio Tazzoli (who’s put up several new climbs in the area, many of which alone and on trad gear).

This is how Distensione came into life, and is a great “winter” alternative for those who who want to climb a route that isn’t too long, is always in the sun and has a short approach.