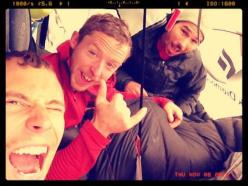 Autumn. Another ideal season in Yosemite. Which means, for Tommy Caldwell, yet another attempt at the Dawn Wall, that heinously difficult 900m route up the El Capitan's southeast face which links sections of the existing climbs Dawn Wall and Mescalito into what is destined to become the hardest, most intense big wall in the world.

Caldwell has been attempting this futuristic line for numerous seasons (possibly more than 100 days on the wall) and although the task in hand is complicated and like nothing he has ever done before, progress has been consistent and tangible. Thanks also to his excellent climbing partners which include his wife Rebecca, bouldering ace Kevin Jorgeson and, as of this year, the extraordinary face climber Jonathan Siegrist.

Banking on previous experience, the tactics this season are somewhat different than in the past, with the "three musketeers" working hard at the central section of the wall which foiled Caldwell's attempts and, importantly, ground to a halt his inspirational autumn 2011 single-push, ground-up attempt.

As we speak Caldwell, Jorgeson, and Siegrist are concentrating their efforts on pitches 14, 15, 16 and 17 - the decisive, crux pitches which will make of break their attempt - in a routine of 2 days on the wall, 1 day off to rest down on the valley floor. Technically speaking though "day" may be incorrect, since some of this intricate, technical climbing is done in the cool of night and this recently resulted in a major breakthrough in the form of a new sequence on pitch 14 which unlocks the crucial move that shut Caldwell down for the last 2 years.

On his site Siegrist has posted a progress report which offers interesting insight into the climb, and yesterday he confirmed to planetmountain "I've linked the very end of pitch 15 - just a few moves from the end, which is likely the hardest pitch on the route and both Tommy and Kevin have made great links too. Tommy seems primed to send pitch 16 as well, also super hard, so things are going very well!" The weather forecast for the next week is great, and with winter knocking on their tent door soon, the three will no doubt be extremely busy...