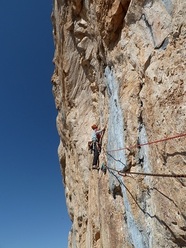 PORTFOLIO / gallery Portfolio: Cose Turche in Ala Daglar, new route by Bernasconi and Spini in Turkey

Cose Turche in Ala Daglar, new route by Bernasconi and Spini in Turkey

Matteo Bernasconi and Davide Spini have established Cose Turche (300m 7a obligatory/8b?) up Kazilin Basi (2944m) in the Ala Daglar, Turkey.

Two weeks in Turkey, more precisely on Kazilin Basi,and the result for Matteo Bernasconi and Davide Spini is "Cose Turche", a new 300m line up the nuova via 2944m face in the Ala Daglar mountain range.

The two Ragni di Lecco members chose an "almost logical series of corners and cracks which at first appearance didn't seem too overhanging" and some of the nine pitches await a redpoint ascent, with difficulties estimated at around 8b.

This was the first time Bernasconi established a route ground-up and he commented "this was a great experience but on our route - given its grade, the angle of the constantly overhanging rock face and the quality of the line - we had tp adopt an ethic (if ethic is the right term) which isn't the "modern" approach of climbing free from one bolt to the next. Instead we progressed upwards via a mix of climbing and aid, and that's how Cose Turche came into being.

The immense rock face currently hosts only two other route, both made in Italy, namely Red, Moon and Star (8a/8a+, 400m, 2010) by Rolando Larcher and Luca Giupponi and Tempus fugit (7b, 700m, 2007) by Mauro Florit, Marco Sterni, Umberto Iavazzo and Massimo Sacchi. As often happens there are some local 'rules' that need bearing in mind when establishing new routes, as Spini explains: "Those who wish to ascend a new route on the Ala Daglar rock faces need to adhere to 'rules' dictated by some local climbers. Drills and bolts are allowed only on some rock faces deemed suitable, while in the rest of the mountain chain trad should be the only style of ascent."

It is worth remembering that close to the campsite there is the beautiful Kazikli Valley with more than 230 sport routes bolted by Recep Ince, the warden of Ala Daglar Camping.