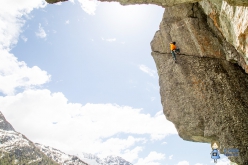 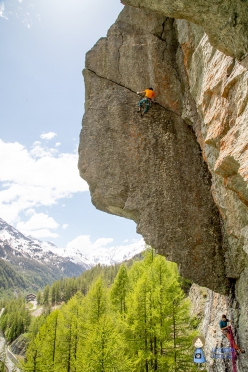 Marco Sappa, belayed by his brother Mattia, while making the first ascent of Fessura di Gianfri at Nid Des Hirondelles in Valgrisenche, Italy, May 2020
Photo by Evi Garbolino Photographer 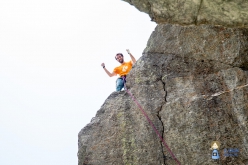 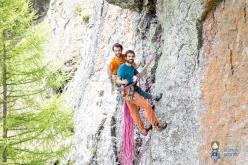 Marco Sappa and Mattia Sappa at the belay while making the first ascent of Fessura di Gianfri at Nid Des Hirondelles in Valgrisenche, Italy, May 2020
Photo by Evi Garbolino Photographer

Marco Sappa reports about the first ascent of La Fessura di Gianfri, a difficult trad crack climb at the historic crag Nid Des Hirondelles in Valgrisenche, Valle d’Aosta, Italy. The route is dedicated to his father Gianfranco Sappa, a Courmayeur Mountain Guide, who perished in a climbing accident in 2019.

The week after "lockdown" rules were relaxed, my brother and I headed to Nid Des Hirondelles at the end of Valgrisenche in search of somewhere isolated to go climbing. This crag was the first to be bolted in Valgrisenche and with its numerous multi-pitches has a very alpine feel to it. Just like the rest of the valley, it’s beautiful and peaceful.

Halfway up the second pitch of Via Nano Curie I noticed a crack that cuts away diagonally through a beautiful overhang. I looked at it more closely on abseil and realised another thin crack split from this leading straight to the lip of the roof.

I didn’t start dreaming too much at first because it looked too difficult for me, especially after lockdown since I didn’t want to spend my time tinkering about with wires and cams.

Having said that, that night I started dreaming about the line which I wanted to dedicate to my father, Gianfranco Sappa, a mountain guide from Courmayeur, who died prematurely in a climbing accident up in the mountains last summer. So the next day I packed my cams and crack climbing gloves and drove back into Valgrisenche with my brother.

We climbed the first 6b pitch to the belay, then I tried to figure out what gear I’d need. Of course I ended up taking far too much! I basically aided my way up on my first attempt, but when I got to the top I was ecstatic: it would go! I realised I stood a good chance of doing it. I made three attempts that day with pre-placed gear, but failed to redpoint it.

We returned the next day and, fresh, I sent the route on my first attempt, placing the gear as I went. There’s no point describing how overjoyed Mattia and I were!

Marco Sappa is an Aspiring Mountain Guide, of the Courmayeur Mountain Guides, psychologist and ski instructor. He has a penchant for crack climbing, a love he discovered thanks to his friend and mentor Giovanni Bassanini. Marco has been to the USA several times and has climbed some of the best crack climbs in the US