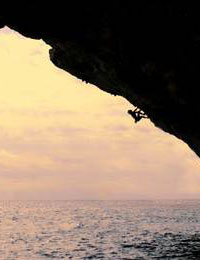 Chris Sharma high above the waves, Mallorca, Spain
Photo by Big Up productions

Remastered footage of Chris Sharma making the first ascent of his deep water solo masterpiece Es Pontas off the island of Mallorca.

Almost 15 years have passed since Chris Sharma made the first ascent of Es Pontas, a ground-breaking deep water solo off the coast of Mallorca with its hallmark seven foot dyno which the American climber fell off at least 50 times before finally sticking it. Before falling off even higher up on the lip of the limestone arch.

Sharma recently described the process as "definitely a pivotal experience in my life that set me on an entirely new path in my life and in the world” and in celebration of his 40th birthday today, Reel Rock have released this remastered cult footage.