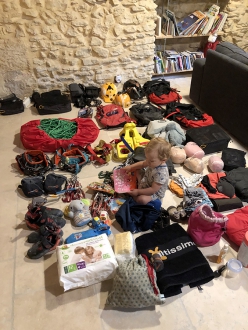 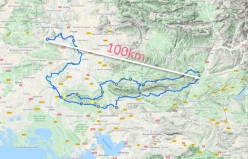 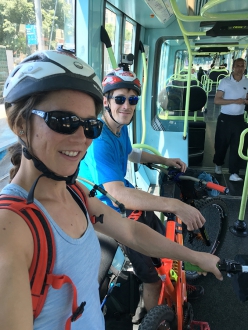 Caroline Ciavaldini and James Pearson start their Tour Des Alpilles with their young son today. Powered by their ebikes, during their 1-month trip the three will visit more than 10 different crags including historically important cliffs such as Buoux, Orgon, Volx and Mouriers.

Caroline Ciavaldini and her husband James Pearson are setting off today with their young son on their Bike and climb tour across the Alpilles Alps, the range of mountains in the in France's Provence. Relying only their ebikes for travel, in accordance to strict French government guidelines during their 1-month trip the three will visit more than 10 different crags within a 100km radius, including historically important cliffs such as Buoux, Orgon, Volx and Mouriers. Above all though, it is a way of reducing their carbon footprint while experiencing adventure close to home.


Tour Des Alpilles Bike & Climb by James Peason
It’s been a few years that we’ve been planning a biking/climbing road trip. Mainly because I really love mountain biking and would like to spend more of my time doing it, and so I convinced Caro that it might be a great way to do some eco-friendly climbing trips! Over the last couple of years Caro has become more and more concerned about our environmental impact and the message our constant travelling gives. Like most wives I imagine, she can be pretty convincing when she sets her mind to it, and so I too have started to question whether or not we are acting in the most sensible way we could. Add having a baby to the mix, and the realisation that we want the world still to be a nice place for Arthur’s lifetime and the lifetime of his kids, we decided to significantly cut down on the amount of air travel we were used to, and also to reduce the use of our car/van.

A few years ago we cycled to Odessa in Spain, though using public transport for the majority of the trip, and although it was a great first attempt at doing things in a different way, there were definitely complications and compromises along the way. Mainly in that it was just too tough to cycle with all the weight on our bikes and backs. Peddling on the flat or up hill was literally a pain in the arse, and the cool technical downhill sections that we’d planned were pretty miserable because of all the extra weight, making it hard to control the bikes.

Having said all that the trip was a really amazing experience, and definitely got us motivated to try again, simply because the access to the climbing area became almost as big of an adventure as the climbing itself (which is saying something considering the climbing in Odessa!) It took another couple of years for us to figure out the details to make it possible, but now I really feel like we’ve got a pretty cool system in place that is going to allow us to combine two sports pretty well!

Sometime last year, I started to look into big classic cycling tours around Europe and try to find one that passed some interesting climbing along the way. We eventually settled on trying to cycle along the Danube (only going as far as Vienna this time) which seemed like a pretty good first attempt at a long distance cycle/climb trip, as although long in distance, the riding itself would be pretty chill, being mostly on cycle path’s along the side of the river. This was good for two things… Firstly it’s pretty flat, and secondly it’s quiet enough not to worry about Arthur being mown down by a crazy car!

Things were all set for the trip, we had the route, the crags, and the partners all lined up, and we were supposed to set off about one week ago. Obviously, with Europe locked down we doubted whether it would be possible to travel internationally and started to look at alternative plans. Once France made its deconfinement plans clear, we knew we’d be able to go outside, but only 100km max from home. We are lucky that close to our house we have quite a lot of decent cliffs, and despite not being the most mountainous region, there is a reasonable amount of decent quality cross country and enduro style mountain biking. Pretty quickly we started to look at places we could go with our bikes from home, like the Ardèche, the Mt Ventoux, or the Alpilles. I think we could have probably done a really cool trip in any of those destinations, and I’m sure we will probably go to them all at some point in the future on our bikes. The thing that made the Alpilles stand out to us right now what is that a lot of the crags have pretty easy access, and the base of the cliffs are relatively child friendly. It seem like a great way to tick a lot of necessary boxes.

As we spent more more time planning the logistics of the trip we both became incredibly excited as to what we might find. Travelling on bikes slows things down so much, and although we’ll be climbing at a lot of crags we've already visited, I’m sure there will be a completely different feeling considering we’ve got there under our own steam.

We are often seduced by the idea that Adventure has to happen on the other side of the world, but realistically adventure can be everything and everywhere. As long as you can approach it with the right state of mind. Right now in France, and at least for the foreseeable future, people are still limited to 100 km and so this close to home adventure might be able to inspire some people to still get out there and have some fun, with the added bonus of reducing our carbon footprint.

James and Arthur and I stayed at home, just like nearly everyone, for 8 weeks of confinement. It gave us the time to rest, get bored, and think… And with the deconfinement beginning in France, we are ready for some new adventures! Following the rules of the French government (100km movement allowed around your home), we've embarked on a bike and climb road trip 100km from home! Why? We love climbing road trips. We always have and always will. But we also want to work hard on decreasing our carbon footprint. The concept was in our to do list since last year, but with the current situation, we had 2 months to think, and decided to act on our ideas… So we’ll set off with two electric bikes, a baby trailer and a material trailer, ropes, quickdraw… and the topos of the very classic, historical crags of the Alpilles!