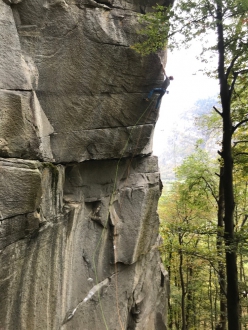 James Pearson climbing Tribe at Cadarese. First ascended in 2019 by Jacopo Larcher, the Englishman made the second ascent on 21/10/2020
Photo by Caroline Ciavaldini 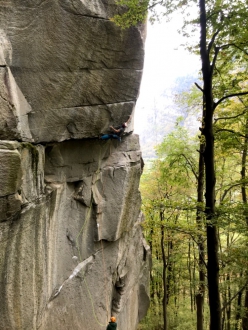 British rock climber James Pearson has made the second ascent of Tribe, the extremely difficult trad climb at Cadarese in Italy first ascended by Jacopo Larcher.

Yesterday afternoon Britain’s James Pearson pulled off the coveted second ascent of Tribe, the extremely difficult trad climb freed after years of courtship in March 2019 by Jacopo Larcher. Pearson travelled to Italy about a fortnight ago with this route in mind and after cleaning the line started working the moves. He was joined by Jernej Kruder from Slovenia who also showed interest in the route and the two shared their beta and psyche.

Pearson is one of the world’s premier trad climbers and on great physical form having redpointed 9a this summer. After falling off the final hard moves a couple of times, yesterday afternoon and much to his own surprise he managed to fight his way through the two boulder cruxes and repeat the route, placing all gear on lead.

He used practically the identical beta as Larcher, unlike Kruder who is trying with a dyno finish to the good hold, and while not disclosing a grade, the 34-year-old told planetmountain.com that it "contains the hardest series of moves I’ve ever done on a trad route."

Grades aside, he confirmed the absolute purity of the line and underlined "Jacopo’s incredible vision for Tribe. I’ve got massive respect for what he did. The route is just amazing." More information will follow in due course.

“Yesterday I climbed the 2nd ascent of Tribe, at Cadarese, Italy. First climbed by Jacopo Larcher in 2019 and left ungraded, Tribe is definitely the hardest sequence of moves I have ever climbed on a trad route, but what makes this route so special is its uncompromising purity. No bolts, no glue, no chips... just a hard line of amazing holds and a few perfect Friends. Big thanks to @jacopolarcher for the vision and @kruderjernej for the belays and support!” James (Sorry for the terrible kiddos music... mini monkey needed entertaining!)