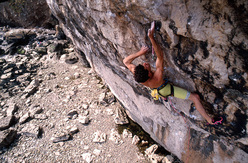 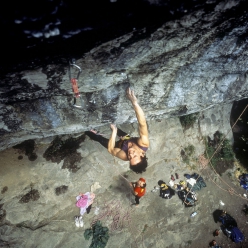 The film 80's Birth of Extreme by Alun Hughes, featuring some of the most important moments in British sport climbing during the 1980s. Featuring Ben Moon, Jerry Moffatt and Johnny Dawes.

Following our in-depth interview with Ben Moon who, together with Jerry Moffatt, was one of the most influential climbers in the world in the late ‘80s and early ‘90s, here’s an extract of the historic film 80’s Birth of Extreme directed by Alun Hughes which documents the birth of sport climbing in Great Britain.

The film starts, for obvious reasons, at Buoux in France with Moon climbing his Agincourt, the first 8c in France, then moves across to Lower Pen Trwyn in Wales where Moon grapples with his famous Statement of Youth and Jerry Moffatt climbs the  first 8c in the United Kingdom, Liquid Ambar. And then there’s the most difficult climb of all for that era: Hubble at Raven Tor.