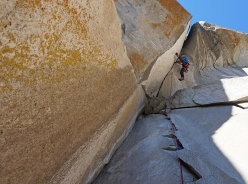 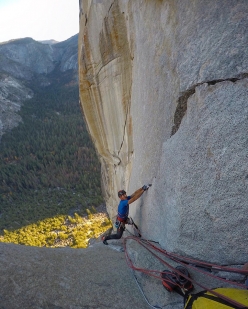 Maurizio Oviglia introduces Astroman on the East Face of Washington Column, one of the most famous rock climbs in Yosemite Valley and the world.

Astroman is one of Yosemite Valley’s legendary climbs and one of the most famous in the world. It is located on the East Face of Washington Column, way down in the valley, right in front of Half Dome. A quick glance at the names of the first ascentionists, and those who subsequently made the first free ascent, suffices to instil a deep sense of respect for this climb. This route oozes with the history of rock climbing and it certainly isn’t like any old other route. Stories abounded about this line and word has it that, not too long ago, Yosemite climbers belonged to two categories: those who had “done” Astroman, and all the rest. Those who’d repeated the route deserved utmost respect!

The fact that Astroman is (somewhat) less tall than the famous big walls on El Capitan means that it has been courted by climbers from all across the globe. But this isn’t the only reason why it’s so famous: over time it has transformed into an icon, a symbol for granite climbing par excellence, a phenomenal array of cracks that make it a masterpiece of this style of climbing. That is why all crack climbers dream of repeating it sooner or later.

I happened to repeat Astroman last October together with Rolando Larcher. We swung leads and I’m not ashamed to admit that we topped out well in the dark and fairly exhausted. Of course, it wasn’t an ideal day for climbing: as often happens in Yosemite the heat took its toil and we reached the famous Harding Slot decidedly dehydrated. Rolando’s feet slipped unfortunately a couple of times; a not uncommon occurrence on the smooth valley granite.. I managed to clim on and climb it free, but had I led the Harding Slot, I would most probably have fallen.

As we continued upwards we realized that the topos published in the guidebooks were precise, but failed to provide an comprehensive idea of overall difficulties, hence those how repeat the climb often underestimate what lies in store. The same holds true for the gear indicated in the guidebooks: while this may well be fine for locals, it certainly isn’t for visiting Europeans accustomed to completely different standards… Many in fact had warned me that they’d underestimated the climb and and consequently encountered difficulties right at the start, having started with too little gear and without the necessary mindset for the overall commitment. As those who’d warned me are fairly strong and experienced climbers, I wondered how this could have happened. Now that I’ve finally repeated it, despite not having led all the pitches, I reckoned it could perhaps be useful to share my thoughts and experience on “our” ascent. Perhaps those wishing to climb it free will avoid some nasty surprises.

I obviously have no intention of changing the grades provided by Bachar, Kauk and Long after the first free ascent, I don’t want this enormous responsibility. It’s worth noting though that the 5.11c rating suggested by the first ascentionists corresponds to our "modest" 6c+, and that this certainly gives no idea at all about the difficulties that lie in store. A few years ago a famous French climber told me that had Astroman’s Enduro Corner been at Chamonix, it would probably have been compared to the crux pitch of Divine Providence! Well of course, when you’re up on Washington Column you’re not climbing at an altitude of 4000 meters as on Divine Providence, but perhaps it is realistic to think that on Astroman you’ll encounter difficulties well into the 7a and 7b mark. And I don’t want to stick my neck out any further.

Anyways, do go and climb Astroman, without underestimating the difficulties. Be prepared for a fight that will surely provide you with some unforgettable memories, in particular on the famous indelible memories in the famous Harding Slot! As everyone who’s somehow managed to get to the top says, it's worth it! But only once in a lifetime though!