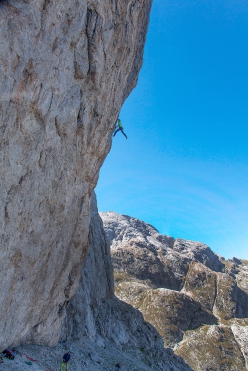 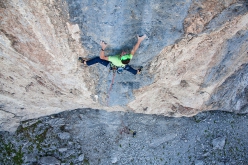 In combining the first two pitches of Cani Morti, the difficult multi-pitch first ascended in 2003 by Maurizio Zanolla Manolo and Riccardo Scarian on Campanile Basso di Lastei in the Pale di San Martino group, this summer Alessandro Zeni created Cani Morti Plus. Graded 8c, this is now one of the hardest multi-pitch climbs in the Dolomites.

17 years ago, in summer 2003, Maurizio Zanolla and Riccardo Scarian made the first ascent of Cani Morti, a complex line up the north face of Campanile Basso di Lastei in the Pale di San Martino group of the Italian Dolomites. Graded 8b+ max and, above all, with 8a obligatory climbing, this test was destined to be reserved for a select few.

Without reconnaissance from above, Manolo and Sky managed to push their physical and psychological limits, experimenting a style of ascent which included extremely few bolts. After the first free ascent in 2004 Manolo expained that "The choice... of using only bolts and excluding all other means of protection seemed to us to be the most honest possible: the bolts protected us every now and then, but also indelibly demonstrated our weakness..."

In short, with mandatory 8a climbing, the commitment level is high, as was confirmed by Scarian who added "While establishing the route and completing the redpoint, one thing that struck me was the mental and physical energy needed to respect these ethics, that is, when the pro isn’t immediately below you. I reckon a bolt 5 meters away is more "alpine" than a row of pegs placed every 50 centimeters, perhaps hammered in and reinforced by abseil." Further demonstration of the overall difficulties stems from the fact that in these 17 years, the route has been repeated only once before, by ace local Mario Prinoth who in 2007 confirmed both the beauty and the difficulties.

This August Alessandro Zeni made a rare free ascent of the line. The 29-year-old tried the route for three days with under-the-radar Dolomites specialist Alessandro Rudatis and, acting on Scarian’s input, Zeni managed to link the first two pitches into one long single pitch. By skipping the first belay and combing the 8b+ (4 bolts in 25 meters) with the 8a+ (4 bolts in 33 meters) he established Cani Morti Plus; at 8c, this is now one of the hardest multi-pitches in the Dolomites.

After his repeat Zeni stated on the Karpos website "My sincerest congratulations to the two first ascensionists of this route, which in addition to being beautiful was created with truly rigorous ethics. For me, beyond being an excellent testing ground, it was also a great example of how to develop a route in a way that respects the mountain even while using bolts."

14.09.2004
FFA of Cani morti by Manolo and Scarian
On 23 August Maurizio "Manolo" Zanolla and Riccardo "Sky" Scarian both made the first free ascent of "Cani morti", their 2003 testpiece on the north face of Campanile Basso di Lastei, Pale di San Martino, Dolomites.