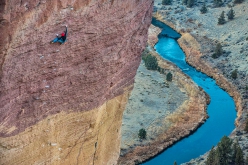 Adam Ondra onsighting Just Do It, the first 5.14c (8c+) in the USA located at Smith Rock, freed by French climber Jean-Baptiste Tribout in 1992.
Photo by Bernardo Gimenez

Adam Ondra pointing to the East Face of Monkey Face at Smith Rock, USA, and the route Just Do It
Photo by Bernardo Gimenez

Adam Ondra onsighting Just Do It at Smith Rock, the uncut video

The uncut video, ie Adam Ondra’s entire onsight ascent of Just Do It 8c+ at Smith Rock, USA, carried out in November 2018.

"That’s the best thing I’ve ever seen in 45 years of climbing" pronounced Alan Watts, the guardian of Smith Rock, after having just witnessed Adam Ondra perform on Just Do It, one the symbols of American sports climbing.

It was Watts who had envisioned and bolted the line in 1989 when sports climbing was still in its early days, and the immense stamina test was freed in 1992 by Frenchman Jean-Baptiste Tribout who, in doing so, created one of the most difficult sports climbs in the world.

Even today this 8c+ has precious little repeats and until only a month ago no one had ever managed to climb first go. Then Adam Ondra made his way to below the East Face of Monkey Face and… well, sit back and enjoy this titanic 20 minute struggle with Ondra's running commentary.

30.11.2018
Adam Ondra onsight attempt on the Salathé Wall in Yosemite / VBlog #6
Adam Ondra attempting to onsight the crux pitches of the Salathé Wall up El Capitan in Yosemite, USA. Belayed by Nicolas Favresse in autumn 2018, the Czech climber deals with the Enduro corner and tries his luck on the Headwall.