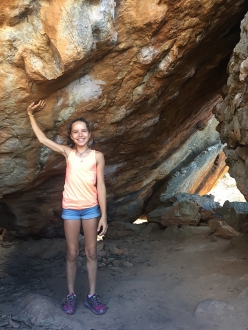 Oriane Bertone, the 12-year-old climber from France’s Réunion Island, has climbed Golden Shadow in Rocklands, South Africa. In doing so she has become the youngest person to climb an 8B+ boulder problem.

The news blazed its way through the climbing community the other day: Oriane Bertone from France’s Réunion Island sent Golden Shadow, an 8B+ boulder problem in Rocklands, South Africa. What made this news startling wasn’t so much the fact that this classic 2004 Fred Nicole testpiece had been repeated once again, but Bertone’s tender age of 12.

In sending the problem Nicole freed a year before she was born, Bertone has now become the youngest climber of all times to repeat a problem of these utmost difficulties, ousting Mirko Caballero and Ashima Shiraishi from the top spot they’d garnered when they were 13. Coincidentally, and somewhat bizarrely given the number of boulder problems dotted around the world, Bertone's ascent happens to be the very same Golden Shadow sent by Shiraishi in 2014.

Bertone’s 8B+ came as a surprise to many, but perhaps shouldn’t have. Her 10-year-old brother is fast making inroads in bouldering, and while she herself has onsighted up to 7C, last year she laid the foundations for this success by climbing two 8B problems - Psychopad on the Réunion Island and Fragile Steps in Rocklands. It was during that winter 2017 trip that she first set her sights on Golden Shadow and, realising it was feasible with the beta painstakingly deciphered to suit her size, she returned with her family specifically with this boulder problem in mind.

Bertone’s remarkable send is documented in the video below that leaves little doubt about her innate talent and extreme focus. What the footage also demonstrates is the complexity of grading across body sizes and types and how climbing at this level seems akin to a perfectly executed gymnastics routine. Raising the question though as to how much younger climbers can - and perhaps even should - go in the future and also how much these ascents should be celebrated by the media.