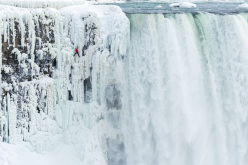 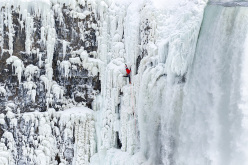 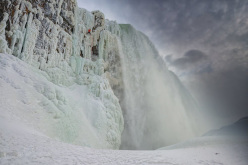 Will Gadd and Sarah Hueniken climb the Niagara Falls

"A couple of days ago, I had an improbable wild dream come true thanks to an amazing team of people who believed." This is what Will Gadd, the 47 year-old Canadian ice climber, tweeted after his ascent of the frozen Niagara Falls, the world-famous waterfalls that mark the border between the USA and Canada.

Not all the Niagara Falls freeze in winter and Gadd had checked out a section of the falls in summer - the Horseshoe Falls - to see whether his project was feasible. After having received permission for the authorities, all he had to do was wait for a stiff winter… The line chosen by Gadd is approximately 47 meters high and the Canadian cleaned immense blocks of unstable ice off the fall before making his ascent together with Sarah Hueniken.

"There were two priorities for the climb" explained Gadd to his sponsor Red Bull "ethics, and safety. "We're doing it on natural protection. No bolts. There won't be one thing left in the ice that wasn't there to begin with, and that's the best possible way to do it." Circa 150,000 tons of water reaching speeds up to 100 km/h low over the crest every minute and Gadd explained "I was so close to the water, I could reach out and stick my ice tool in the Niagara Falls."

As to the technical difficulties of the ascent, Gadd estimates the grade at being WI6+ but added "The ice is formed in layers. That means there's a layer of ice, then snow (with a lot of air), then another layer of ice. It's unstable, for sure."

Gadd has long been one of the world’s premier ice climbers and after his discovery of Helmcken Falls, this is undoubtedly an important moment in his climbing career. "I've traveled the world in search of the most challenging climbs, but Niagara Falls, one of my home country's most iconic landmarks, has been a lifelong mission that I previously never thought possible,"

With more than 20 million visitors a year, the Niagara Falls are one of the most popular tourist attractions in the world and it comes as no surprise therefore that news about the ascent by Gadd and Hueniken has been broadcast by mainstream national and international media. Coming just a few days after the ascent of Dawn Wall at the hands of Tommy Caldwell and Kevin Jorgeson, now it’s ice climbing that’s enjoying its "15 minutes of fame"…