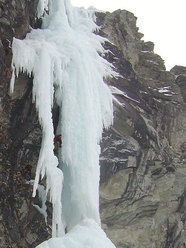 During the ascent
Photo by Planetmountain.com 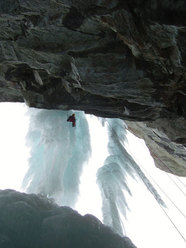 On the drip
Photo by Planetmountain.com 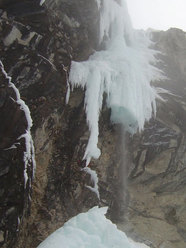 After the collapse...
Photo by Planetmountain.com

The story of an ice pillar collapsing. An adventure which thankfully resulted in no injuries, but which provides ample food for thought...

When we first heard this story we could hardly believe our ears. Because there can be no doubt that what happened on that icefall is nothing short of a miracle (see the photos if proof is needed). Things could have turned out extremely nasty indeed... Yet destiny - at least this time! - thankfully decided that it would conclude with a massive scare. Apart from thanking one's lucky stars, what else can one do? Some say that one should go climbing again immediately, and they're not wrong. Others say that one must learn from this, because things don't always end out this well, and this too is true. It also seems that it helps to talk about what happened, to friends or whoever you wish to share the experience with. Because, the say, talking not only helps overcome a trauma, it also helps to share the experience with everyone else. And that's why we asked our anonymous climbers to tell their story. Because it can be of great help to others. And also because despite the fact that we all know that ice climbing has some inherent risks, at times it's not a bad thing to sit back for a while and think.

The story:
"Hi, I took some photos of a new route close to another one I first ascended last year. I've never seen this new one reach the ground, so we could reach the drip by climbing a couple of pitches on rock! What d'you think?" The answer to the phrase (there's a new line..) was immediate: when shall we go?

Our car stashed to the brim with gear for three climbers reached the closest car park and dropped us into the freezing cold which was slowly alleviated thanks to the steep walk-in. After circa 40 minutes there she was: beautiful, worrying and new. The expert friend hadn't betrayed us and the long journey seemed as if it would bear fruits. The water which ran down the hanging drip flowed into a sort of bowl and every now and then several liters of water showered onto the unfortunate belayer. We soon realised that the rock quality wasn't the bet and, after a camming device fell out, the intention of freeing a cutting-edge line gave way to a laborious aid climb. The 10mm bolts accompanied us to a comfortable terrace where an airy traverse left would have led us to some small and inocuous curtains of ice, but we looked at the time and... had to descend. Seeing that just one pitch in a day is worse than even the most pessimistic expectations, we trotted back to the car trying to decide on a day which suited us all well to finish off the business. OK, in two Tuesday's time, seeing that other commitments mean that we can't meet up earlier. See you in a fortnight's time!

The ritual is always the same: the rendezvous, the cold, laughter and off we go to our objective which after another 40 minutes lies in wait... But...! Noo, the drip has reached the ground! "Believe me, in all these years I've never seen it reach the floor" says our friend and expert local, adding "it's grown another two meters at least compared to the photos I took three days ago. So what shall we do?" Seeing that there were three of us, the ideas multiplied exponentially, from "if it's reached the ground let's wait for a couple of days until it consolidates and then climb it" to "let's take a closer look, I reckon it's already in condition". As well as the heretic "how about climbing the other dry tooling pitch, reaching the curtain and if it collapses, at worst it'll brush our hair, and then we'll climb that nice fat pillar above."

One of us sounded a decisive "No. If the ice reaches the ground it's unethical to climb the rock vault: we need to climb direct, or at worst, after the first pitch bridge out onto the drip and climb it." This last consideration split the group and other factors came into play, such as fear, experience, ambition, foolhardiness and ability, all of which are present in every one of us in different percentages and are completely subjective. So the trio turned into a duo... which decided to attempt the climb from the large suspended fringe. A bolt two meters above the belay significantly reduced a part of the risk and then, slowly but surely, a first ice screw was followed by a second, accompanying upwards the dance of the climber. But suddenly, a dozen or so meters from the belay, the drip, indifferent yo its ambitions and our discussions about ethics, decided it couldn't care less and tumbled beautifully earthwards with its human load...

A strangled scream, the clang of gear and the subdued sound of ice imploding on itself filled the silence of the valley for moments as long as life itself. Fleeing from the falling blocks of ice, adrenalin pumping and the fear of looking at what a few seconds ago was a dream alternated in fractions of a second. Immediately though the thought of rescue overrode all fear, but the first breath-taking meters upwards enabled me to clearly see that, miraculously, my friends were unhurt. The slender ledge at the base of the icefall was now filled by blocks of ice as large as a bus. Then, finally grouped together at the bottom of the abseil, we realised that the only tribute we'd paid to the risk was the loss of a complete set of camming devices, some nuts, a thermos of ginseng tea which, buried beneath three or four meters of ice, we'll only be able to drink in late spring. Who knows whether it'll still be hot?!

After all that happened, once again I stop to think about all those times when we talked about mountain safety. And, with fewer friends than before, by now I have to recognise that all this talk shatters against each individual's vanity. Vanity which, at times, leads us to underestimate risks and overestimate both our own ability and good luck in a spiralling circle which sees us excellent preachers but, all to often, terrible role models. My dear friend, after having survived that collapse, told me: "you see, it's true that it collapsed and that we were lucky... but if it had remained in condition, just think about what a great first ascent we'd have done, and what beautiful technical moves."

With a statement like there's no use reminding people to be prudent and experience too is useless since, seeing that it should help people learn from past mistakes, in a case like this it's only a silent witness to the risks avoided beforehand. I'd like to convince everyone that is climbing is a very dangerous sport, where one cannot and one must not improvise anything and very often one has to pay a price even when one dare's little. I believe that, morally speaking, now more than ever before the technical limit should not run parallel with the impalpable thread which separates life from death. Nowadays , with the gear and the awareness which we should have, the tribute of lives lost seems far too high. So much so that I often find myself thinking that the only steps taken have been those of adding illustrious and non-illustrious names to a list which, by now, really has become far too long."