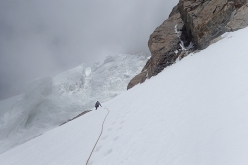 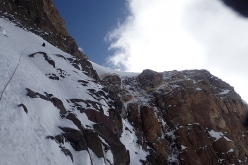 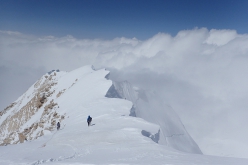 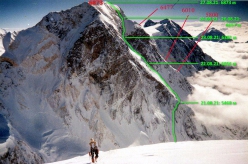 Russian mountaineers Dmitry Golovchenko, Sergei Nilov, Dmitry Grigoryev have made an alpine-style ascent of the South Face of Voennikh Topografov, aka Military Topographers, at 6873 m the third highest mountain in the Tian-Shan range. Golovchenko reports.

Dmitry Golovchenko, Dmitry Grigoriev and Sergey Nilov, the acclaimed trio of Russian mountaineers who have numerous gruelling first ascents to their name such as Moveable Feast on the north face of Thalay Sagar in the Indian Himalaya, have endured another testing climb together, this time on the south face of Voennikh Topografov 6873m in the Tian-Shan massif. After reaching the summit they traversed across the West Ridge to complete their circa 3000m long Impromptu, graded TD, AI3.

Military Topographers (6873 m) is the 3rd highest peak in the Tian-Shan mountain range after the much more famous peak Pobeda (7439 m) and Khan-Tengri (7010 m). Priori to our expedition there were only three established lines (and just one from the South) on such a big mountain, so we were certain we'd find something that would interest us.

We arrived in BC by helicopter organised by the Ak-sai Travel company on 10th of August, and on the same day we started to carry equipment below the Chonteren col (5500 m) roughly 20 km from Base camp. It took us more than a week to get there and bring all the equipment, and we finally established our camp on the col on 18th of August.   On the 19th we worked out the best way to descend from the col to reach the South face of the mountain, but we had to cut through snow mushrooms and therefore spent a good couple of hours doing this. On the next day we descended via 4 rappels from the col and crossed the Chonteren glacier. We found a nice snow and ice line leading directly to the main summit and decided to follow this. That night we pitched a tent inside a very welcoming crevasse below the start of the route at 4840m. We also fixed our 4 ropes on the route.

On the 21st we jumared these 4 ropes and added 13 more pitches, stopping at a big snow ledge at 5468m.The next day we climbed 18 50m pitches and spent more than 3 hours at 6056m preparing a ledge for a tent, which despite our efforts remained very small for 3 people.  On the 23rd the weather was poor so we climbed just 9 pitches and stopped relatively early, at 5 p.m. and at 6382m inside very nice crevasse. During the next we we added another 12 pitches in very bad conditions, and followed these up at spending two hours preparing our ledge below a huge rock at 6657m. We planned to make a summit push the next day, but the weather conditions were extremely poor so we just fixed 4 pitches.  On the 26th we made another summit push, but once again we were unsuccessful: bad weather (wind and snow) coupled with the fact that Dima Grigoriev felt bad, forced us back to our bivy after the second pitch.

On the 27th Dima felt better, so we decided to give it a try. However, immediately after the 1st pitch it became clear that Dima was very weak, he wasn’t carrying anything and still he was very slow. We fixed 4 pitches, climbed another 3, and then all of a sudden we were at there top! At 6873 meters. It had taken us around 5 hours to reach it that day. We spent more than an hour on the summit and started to descend via the West ridge, before digging a ledge on a ridge for the tent at the altitude of 6801 m.
On the 28th we continued to descend via the West ridge - a very beautiful line, especially when visibility is good. In our case however it mostly snowed. Shortly after 5 p.m. the wind and snow made a descent impossible so we had to stop in crevasse at the altitude 6058m. The next day, despite very bad visibility, we managed to get back to the Chonteren col, thereby completing our traverse of Military Topographers.

Although Dima is now at home and OK, his personal ordeal was anything but other and it was only back in Moscow that he was diagnosed with a blood clot in his lungs - this is why he couldn't breath properly just below the summit! He knew though that we were 1 day from the top of the mountain, and also that descending via the West ridge would be much easier, so he forced himself to continue on up! As soon as he became totally focused on his breathing (and because of the weather, the altitude and wind) - he got frostbite of 2 fingers on his right hand. It is in these conditions that we went for 20 km from the summit down to the completely empty base camp, since the season had finished on 26th of August. After a rest day we spent the next 4 days walking a further 80km to where a car could pick us up, and it was only on the 8th of September that he first saw a doctor in Moscow hospital… The doctor said Dimai had been extremely lucky twice: firstly when the clot went towards his lungs instead of his heart, and secondly when he managed to get off the mountain by himself, without damaging his lungs too much…

03.04.2017
Great mountaineering on Thalay Sagar: the Russian direttissima video
The video of the first ascent of 'Moveable Feast', the huge new route up the North Face of Thalay Sagar (6904m) in the Indian Himalaya first climbed from 9 - 17 September 2016 by the Russian alpinists Dmitry Golovchenko, Dmitry Grigoriev and Sergey Nilov.