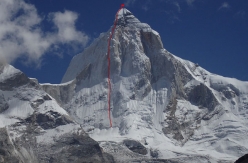 The video of the first ascent of 'Moveable Feast', the huge new route up the North Face of Thalay Sagar (6904m) in the Indian Himalaya first climbed from 9 - 17 September 2016 by the Russian alpinists Dmitry Golovchenko, Dmitry Grigoriev and Sergey Nilov.

The news, understandably, caused quite a stir: a new direttissima had been forged up the North Face of Thalay Sagar, the stunning 6904m peak in India’s Garwahl Himalaya. The route was climbed over a ten day period by three Russians, Dmitry Golovchenko, Dmitry Grigoriev and Sergey Nilov who chose to climb without a portaledge as "a sort of extra challenge". Here’s the video of their Moveable Feast (1400m, 6B Russian scale, ED2, M7, WI5, 5c, A3).