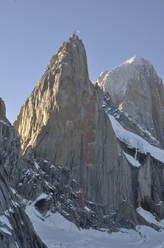 Via Russo, new Russian route on Aguja Poincenot in Patagonia

Anna Piunova of mountain.ru reports that a strong Russian expedition has forged a massive 1600m line up the SE Face of Aguja Poincenot in Patagonia. In early February Sergey Dashkevich and Mikhail Davy (both from Ekaterinburg), Evgeniy Dmitrienko from Rostov and Arkadiy Seregin from Moscow established their Via Russo by climbing a line to the left of Bagual Bigwall to finish up the Sperone degli Italiani established by Adriano Carnati, Massimo Colombo and Alessio Bortoli in 1986.

"We put up 750m of new terrain (600m of them are really steep) on SE Face of Aguja Poincenot, then joined the Sperone degli Italiani and classic line for another 15 pitches up to 6b to reach the summit" Seregin told Piunova. The team left El Chalten on 7 February and forced their technically difficult route with difficulties in the region of (ABO) A4 M4 through poor weather to the summit in 8 days capsule style with the use of a portaledge. A further two days were needed to descend the Italian route and they returned to El Chalten on 19 February.