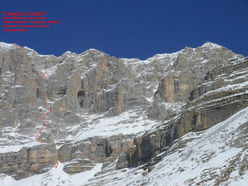 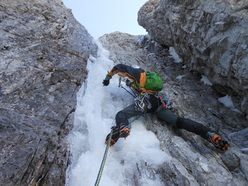 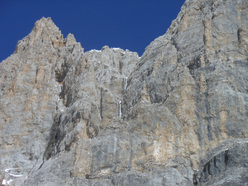 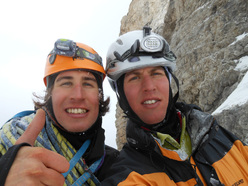 On 13/03/2012 Silvestro and Tomas Franchini established Via Fratelli e Cortelli, a new route up Cima Pietragrande in the Brenta Dolomites.

In mid-March, the two brothers Silvestro and Tomas Franchini put up Via Fratelli e Cortelli, a beautiful, thin line of ice up Cima Pietragrande in the Brenta Dolomites. Born in 1987 and 1989 respectively, the two ski instructors in Madonna di Campiglio and aspiring mountain guides were taken aback by this slender sliver of ice: "we didn't expect such beautiful surroundings. The gully was thin, delicate, hard but fantastic."


We want to write this article because we care about what we do: our routes, rock faces, our peaks and the style we use to climb them. We want to avoid what has happened in the past, that others ignore existing routes and how they were ascended, imposing new styles and even drilling and changing the rock forever were we had already climbed respectfully and clean. This happened unfortunately on one of our routes we established last summer, Tempi Cupi in Val Genova and this is why we now want to inform others about we we got up to during this bizarre winter season!

This was our third winter as ski instructors in Madonna di Campiglio, and since this our main source of income, we were fairly busy on the slopes this season. Having said that, we're really attracted to the mountains during this time of year and, not being able to find the time to climb, we felt pretty caged up. We were out there every day, looking at conditions, analysing the mountains from a distance, unable to lay hands on them... it was tough.

But this year, not having had to “lose” days for the mountain guide courses, we managed to take advantage of the time at the end of January we climbed a route that had been playing in the back of our minds for the last two years. Located in Cima Crozzon in Brenta Dolomites, this line was really dear to us and the experience proved fantastic, with the approach, the ice bivy, the magnificent face and the storm which proved to be the icing on the cake! We carried out what is likely to be the first repeat of we have gone along with the likely first repeat "Lisa dagli occhi blu", a line which owes its existence to the intuition of R. Parolari, and M. Piccoli, established years back and surprisingly unrepeated. We were happy to have been the first to explore it once again-

This beautiful ascent was followed by a stint of work but then we thought we'd go and explore another prestigious icefall, Canavaccia Val Nambrone, but we soon realised that conditions were too dangerous and the icefall might collapse due to the enormous amount of water circulating inside. Despite this setback we invested our time well and climbed and rigged four new waterfalls close by, naming them after our family: Antonio, Piera, Silvestro and Tomas. We highly recommend these icefalls due to their beauty, the surroundings and the ease of access.

Much still needed doing on the slopes but we were finding it tough to stay put and not set off in search of a new adventure. When working at Rifugio Grostè we constantly checked out the drips which every now and then cpme into condition across the vastness of Pietra Grande. And all of a sudden there they were! They had formed overnight! Alarmed, we hastily organised an ascent using Rifugio Graffer as our base where we were hosted by the famous Manni brothers, with whom we spent the evening talking out mountain climbing and sharing experiences.

We left early the next morning, conditions weren't ideal yet but we decided to give it a go... we didn't expect such beautiful surroundings. The gully was thin, delicate, hard but fantastic ... and Via Fratelli e Cortelli came to life. We tried to top out as quickly as possible because of the warm temperatures and lurking dangers, and then we descended down the beautiful and elegant ridge. Back at Rifugio Graffer we changed our clothes and sped off to teach the next ski lesson, physically exhausted but minds fresh and alert! Two days later the ice gully collapsed due to the rising temps and we were pleased to have seized it at just the right moment.

We would like to thank all those who take to the mountains and keep them clean, unpolluted and as untouched as possible.