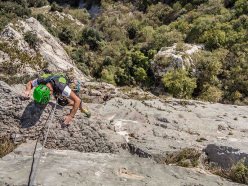 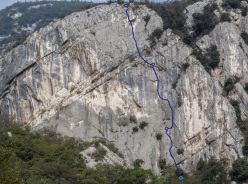 Via del Trenino and the climbing above Passo San Giovanni (Arco), put up in 1986 by Giampaolo Calzà Trota, Rino Zanotti and Andrea Zucchelli and recently re-equipped by Calzà and Danny Zampiccoli.

Autumn cleaning at San Giovanni, the place where climbers from Rovereto hung out in the past. Technical climbing that in no longer fashionable, slabs seem to have lost their appeal. While pruning some bushes at the base of the cliff my mind wanders back to the days when there weren't any routes at this crag, when my uncle and I climbed a new route all the way to the top. We named the climb after the small Austrian train, called MAR, that from 1891 to 1936 connected the Adige valley to Busa (the Lake Garda area, Editor's note). They were far more advanced than we are now, perhaps ahead of the times, perhaps a premonition of the traffic disaster we'll be facing in the near future...

Via del Trenino, the route of the small train, was climbed ground-up in autumn 1986 with some pegs, a few hexes and wooden wedges for protection. After the first repeat Rino Zanotti and I decided to bolt it, in view of future ascents. But then... then the entire crag was re-bolted and Via del Trenino had its bolts removed since it ascends above the sport climbs. And so it slumbered, until now.

Rino was nicknamed "El Grola" for his perennial love for the mountains. A Member of the Riva del Garda SAT, he took care of the club's paths and I remember all those times I accompanied him as a child to mark the trails with paint and brush. It was he who took me on my first climb and it was he who joined me on my first ascent.

As to Via del Trenino, I still remember how scared I felt at the flake on pitch two, with only a wooden wedge ten metres below me. Now I'm back again, but this time I've placed four Friends, I just love them! I'm with Danny Zampiccoli (a brother to me, together we could climb into infinity). After a season working at the refuge he's perfectly trained at serving beer and soup, the route is a good start. We climb the entire route with Friends only, sort out the belays with bolts, place some threads and come across two old pegs of mine, driven in hard and still in excellent condition. Thank God, I think to myself, that I remembered this route to a simple stroll...

So now I'll leave you with this little climbing gem, now described as TRAD or as I would call it, free... There's little in-situ gear, there are some threads and a peg, all the belays are equipped. Those who want to repeat it should have experience at placing trad gear.