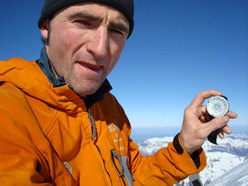 Ueli Steck from Switzerland has set a new speed record on the Eiger North face, climbing the Heckmair Route in 2:47:33.

On February 13 Ueli Steck from Switzerland set a new speed record on the Eiger North Face, climbing the Heckmair Route in a staggering 2 hours, 47 minutes and 33 seconds. In doing so the 31 year old smashed the previous record of 3 hours and 45 minutes, set by himself in February 2007.

To improve on last year's time Steck lost 5kg in weight and, importantly, changed strategy, opting for even less gear (1 icescrew, 2 locking carabiners, 2 carabiners, 1 quickdraw and 1 7mm, 30m rope) which made his rucksack 3 kg lighter than during the 2007 ascent. And unlike last year Steck did not self-belay himself with his rope on the tricky sections, instead he simply clipped his daisy chain into the in-situ pegs when the going got tough.

Steck commented: "I was sure that I could be a bit faster than last year. There was plenty of snow in the lower parts of the Eiger north face, which cost me a lot of energy. On the other hand I found great conditions from the 'Schwieriger Riss' on. The demanding technical sections were very dry and I was able to climb without gloves."

Steck timed his ascent, as last year, from the Sandri & Menti memorial tablet to the summit. The 1800m high Heckmaier route was first ascended in July 1938 by Heinrich Harrer, Anderl Heckmair, Fritz Kasparek and Wiggerl Vörg.