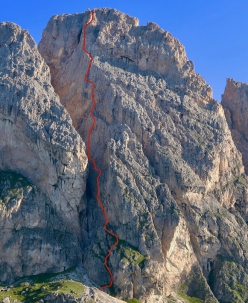 At the start of August Aaron Moroder and Miran Mittermair teamed up to establish Uein Line on Große Fermeda, the striking tower in one of the most famous mountain groups in the Dolomites, the Geisler.

Aaron Moroder had noted a steep line up the obvious dark water streaks and, after having checked with relief that the terrain was still unclimbed, set off early on Saturday 4 August with Miran Mittermair.

First the two followed the SW ridge of Kleine Fermeda for five pitches and then instead of continuing leftwards climbed directly up into unknown territory. A steep corner was followed by beautiful slabs that led towards the heart of the route, namely the dark water streaks.

"I hammered in a short peg and wonderful pockets in bombproof rock indicated the way upwards" commented Moroder, who before even realising it stumbled across a blue sling that indicated they’d joined the Normal route up Grande Fermeda.

The duo shared one pitch of grade III climbing up the route first climbed on 4 August 1887 by mountain guide Michele Bettega together with Edward Theodore Compton, T. G. Martin and Karl Schulz, then continued independently for another three pitches to reach the summit. They shook hands but as they started to coil the rope they felt their fingers tingle: an electrical storm was brewing and, renouncing an entry in the summit book, they rapidly descended down the normal route.

Uein Line is dedicated to Bernard Mahlknecht, a friend who perished on 17 June in a climbing accident on Mount Agner.

17.05.2018
Via Elia, new Dolomites rock climb above Selva di Val Gardena
Florian Grossrubatscher and Armin Senoner have made the first ascent of Via Elia, a new multi-pitch rock climb up Mt. Steviola in the Langental valley (Puez - Geisler group) in the Dolomites.

17.10.2017
Via Mirko, new rock climb above Val Gardena in the Dolomites
The Italian Mountain Guides Armin Senoner and Manuel Nocker have made the first ascent of Via Mirko, a new rock climb up Monte Steviola above Vallunga (Puez-Odle group), Dolomites.