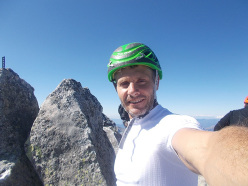 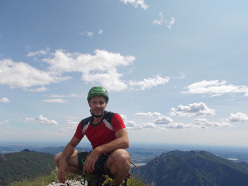 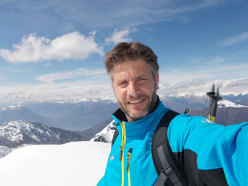 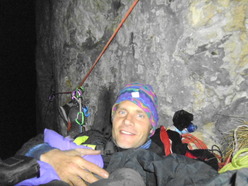 Marco Anghileri on 14 March 2012 at the bivy after the prow during his winter solo of Via dei Bellunesi up the SW Pillar of Spiz di Lagunàz (Pale di San Lucano, Dolomites).
Photo by Marco Anghileri

I’ve just topped out after another wonderful route established solo by Riccardo Bee up the central pillar of the west face of Monte Agner in Dolomites., while recuperating my great Mauro I hear my name "echo" from behind, called out by Marco Anghileri who’s just completed Spigolo Nord, Agner’s huge north arete... we all hug each other shortly afterwards.

In the evening we celebrate at Locanda Col di Pra, each having succeeded on their own climbs, each with their own projects, I dream about long and complex climbs...

Down in the valley there is also Aldo, Marco’s father.

No one ever had gave me anything until that day. "Look what I've got for you" Aldo said as he opened the boot of the car. A red rucksack, brand new. An Andes rucksack.

Many years have passed since then, 19 summers, and the rucksack has aged with me, along with other rucksacks and dozens of routes and mountains.

"Hi Ivo, I have a rucksack for you, you’ll definitely use it"

This time it’s Luca, Aldo's youngest son... and now I have two Andes rucksack, two rucksack distant from each other but yet so close together, because they are united by an intense friendship and the love we share for the mountains...

I’m excited to look at them, the past and the future, and that outdoor equipment company that unites all those who live below the Grigna mountains and beyond.

Thanks Aldo, thanks Luca... dreams will continue to grow in the minds of those who know how to dream.

17.03.2014
Marco Anghileri has left us
Marco Anghileri 'Butch', 41 years old, great alpinist from Lecco and member of the Gamma climbing club, extremely well known, loved and held in high regard by the entire mountaineering world, has died on the Central Pillar of Mont Blanc. The body was recovered this morning by the Valle d'Aosta Mountain Rescue service.