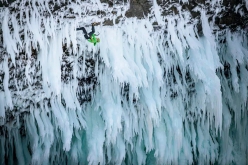 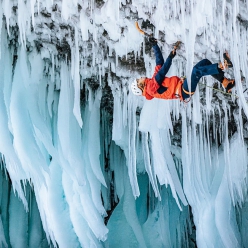 Tim Emmett making the first ascent of Mission To Mars at Helmcken Falls in Canada.
Photo by Jon Glassberg / Louder than 11 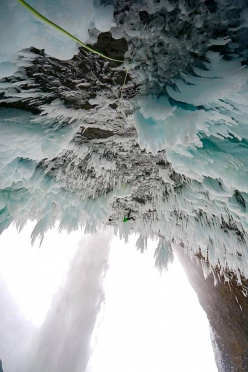 At the Helmcken Falls in Canada Tim Emmett and Klemen Premrl have made the first ascent of Mission To Mars, a hugely overhanging ice climb they have graded WI 13.

Tim Emmett and Klemen Premrl have set the pace once again at Helmcken Falls in Canada. The hugely overhanging cave that gets its name from the immense waterfall was discovered by the Englishman with local climber Will Gadd in 2010 and over the years its particular spray ice - formed when the wind transports humidity from the waterfall that never freezes despite sub-zero temperatures - has become a reference point for the world’s elite.

On 9 February Emmett and Premrl exceeded themselves once again, establishing and freeing the 40 meter Mission To Mars through the steepest part of the cave. So steep in fact that it overhangs a massive 30 meters! Mission To Mars is a 4-bolt extension to their recently added Nadurra Durra and, graded WI 13, is the first of its kind to enter this realm of difficulties. Mission to Mars is deemed a full grade harder than nearby Interstellar Spice established by the Emmett-Premrl partnership in 2016.