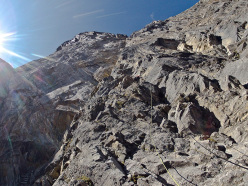 Hansjörg Auer during the first ascent of The Music of Hope (7a, A1, 500m), first climbed on 09/09/2014 together with Gerri Fiegl on Kristallwand, Kirchkogel, Austria.
Photo by Hansjörg Auer 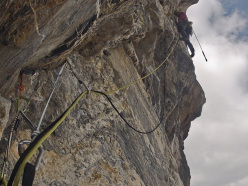 Hansjörg Auer during the first ascent of The Music of Hope (7a, A1, 500m), first climbed on 09/09/2014 together with Gerri Fiegl on Kristallwand, Kirchkogel, Austria.
Photo by Hansjörg Auer

The Music of Hope, new Kristallwand climb by Hansjörg Auer and Gerri Fiegl

On 9/09/2014 Hansjörg Auer and Gerhard Fiegl made the first ascent of The Music of Hope (7a, A1, 500m), a new route up the Kristallwand, Kirchkogel, Ötztal Alps, Austria.

"It won't become a five star classic and in truth I really can't imagine it'll get many repeats. But it was there and sooner or later it had to be climbed." This are the words used by Hansjörg Auer to describe to Planetmountain his latest first ascent, a new route up the Kristallwand on the 3280m high Kirchkogel, a peak hidden away in the folds of the Gaisbergtal way up in Austria's Ötztal Alps.

In March 2012 Auer climbed the first route through this chossy north face via his The Music of Chance (6c/A3), forged with a series of different partners including his brothers Vitus and Matthias, Ben Lepsant, Elias Holzknecht and Berti Gleirscher and in January 2014 he returned with David Lama to attempt a line up the righthand side.

The idea was to try and climb a route without bolts, in training for the but their Masherbrum expedition, but the attempt was cut short when a flake detached, sending Auer abruptly downwards. They decided to abandon the attempt and it was only this summer that Auer managed to summon up the necessary motivation to attempt the line once again. Compounding to the difficulties was Auer's worry that, in summer and therefore in far warmer conditions, the rock would be even less solid than in winter. Yet Auer's thirst for the unknown got the upper hand.

Together with Gerri Fiegl Auer climbed the 500m line in 9 nerve-wracking hours. The new route is called The Music of Hope, is graded 7a, A1 and is protected above all with Bird Beaks. No bolts were added and the Austrian mountain guide described the climb as "12 spicy pitches, lot's of chossy rock and a real adventure..."