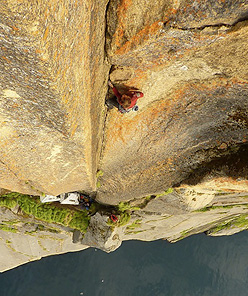 "The grass kept the cracks in supreme condition." The Devil’s Brew, Greenland.
Photo by Favresse archive

"Probably the most adventurous route we have ever done." This is how Nico Favresse describes The Devil’s Brew, the latest new route up the 850m high "Seagull wall" somewhere off the coast of Greenland which comes in the wake of another two routes established at the start of July. Established with his brother Olivier, Sean Villanueva and Ben Ditto with the use of three portaledge camps, the route has all the makings of one of their finest ascents to date. We'll find out more when they sail back to Europe, in the meantime check out the brief blog report below.

"I’ve been looking at that wall for twelve years, but I’ve never found any team good enough" Bob Shepton winner of the 2009 Tilman medal. On July 12 we committed to "the impossible wall". After 8 days we found ourselves on the summit on July 22. So how is it possible that we passed 11 days in only 8 you might be asking yourself? The answer my friend lies in the burning midnight sun and 30 hour-days or nights or whatever you want to call it.

Our efforts on the wall and on our musical instruments yield probably the most adventurous route we have ever done. It has everything: grassy cracks, spongy mossy cracks, licheny faces, kitty litter offwidths and an inbuilt shower. We got rained on, we got shat on and we got vomited on. We now understand better why the locals call it "Seagull wall".

Every pitch of the 850m wall offered incredible beautiful sustained climbing, always challenging, on superb quality granite. We are very happy to have free climbed the whole thing (if grabbing grass is accepted as free).

We decided to name this new line "The Devil’s Brew" after a little present we offered Bob when we first met him and which he calls the Devil’s Brew. Also it remarkably resembles the water running from a black hole which we collected on the wall, both in colour and taste.

We are particularly proud that we left nothing behind: no bolts, no pitons, no cordelette. The only things repetitors may find extra are a few more brown falcons on the wall but we suspect they have already left. We topped out on the summit with all our gear and portaledges and hiked down to the coast and celebrated our adventure with champagne and freshly caught fish. Later that night we awoke to a raging storm that lasted for a few days so we were very unfortunate not to have experienced that while still on the wall."