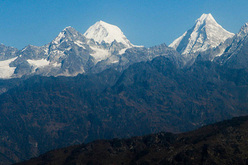 Americans Joseph Puryear and David Gottlieb have made the first ascent of Takargo (6771 meters) via its East Face in Nepal.

At present there is little information to go by, but what we have is certainly enough to make many a mouth water: Joseph Puryear and David Gottlieb have successfully made the first ascent of Takargo (6771m) in Nepal.

The highly experienced American team travelled to the remote Rolwaling valley in February where they spent almost a fornight close to the village Beding climbing icefalls they had observed during their 2008 trip to the valley. They then moved on to the Tradkarding glacier and establised Base Camp at 3700m with their eyes set on the West Face of Takargo, also referred to as Dragkar-Go.

On closer inspection though Puryear and Gottlieb realised that the lack of snow rendered conditions too dangerous and they therefore changed objectives and spent a day moving across to the East Face, where they established Advanced base Camp tat 5800m. The duo reached the summit on 12/03/2010, descended to the safety of their Base Camp and will now begin the long return home.

Over the last few years Joseph Puryear and David Gottlieb have made a series of impressive alpine-style first ascents on remote mountains in Nepal, including Kang Nachugo (6735 meters) in the Rolwaling valley in 2008 and Jobo Rinjang (6778m) last April. We're certain that this latest adventure was be just as stunning as the others and we look forward to reporting more in the near future.