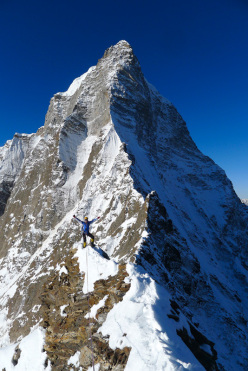 In October 2012 British alpinists Mick Fowler and Paul Ramsden made the first ascent of Prow of Shiva ED+ up Mt. Shiva (6,142m), India.

British alpinists Mick Fowler and Paul Ramsden have forged a major new route in the Indian Himalaya by ascending the striking NW Prow of Mt. Shiva (6142m). Their aptly named Prow of Shiva is graded ED (sup) and was climbed in seven days, while a further two days were needed to descend down the previously unclimbed south east flank.

Writing on Berghaus.com, Fowler stated "Contrary to expectations, the rock on this amazing feature turned out to be top quality granite with the cracks liberally choked with ice. And the situations ranked alongside the best either of us have experienced in the Himalaya. In near perfect weather, we enjoyed a bivouac on a hanging rock balcony with 2,000ft of space beneath our feet, memorably hard mixed climbing and thin, icy slabs reminiscent of the best wintry challenges on Ben Nevis. With the technical challenges stretching our ability, success was in the balance until the final moment. It really couldn’t have been any better."

Shiva was first climbed in 1988 by a female expedition comprised of the Japan's Junko Tabei, (the first woman to climb Everest in 1975), Ryuko Matsuda, Toyo Kurai, Kakuko Bizen and three porters. It is worth noting that the Fowler – Ramsden duo is one of the UK's longest standing and most successful partnerships, and while in 2010 they made a first ascent up the the unclimbed North Face of Sulamar, their ascent of the Central Couloir of Mt Siguniang earned them the Piolet d’Or 2002.