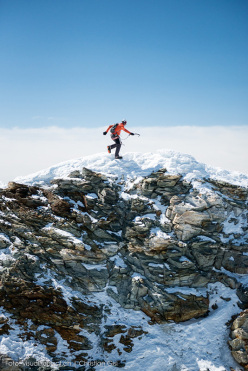 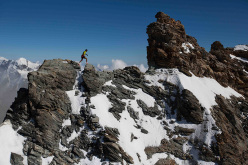 Speed and record-breaking alpinism seen (and experienced) by Ivo Ferrari.

I’ve stopped, am immobile at the start of the steep path. Strapped to my writs is a new watch I’ve bought for this occasion: it, the watch, is capable of doing everything… at least, that’s what it says in the instructions, a whopping 99 page manual! It records the ascents, descents, my heart beats per minutes, the distance, average time etc etc.

I on the other hand can’t do any of those things described in the manual, or perhaps they don’t even interest me. But today I’m here, down in the valley, a thousand vertical meters below the summit cross. All I need to do is press ‘start’ and this timing game would start, a game my shiny new watch would help me do better, would stimulate my mind. Last night I watched the short film about a new record up the North Face of the Matterhorn: beautiful, interesting, an astounding record time, congratulations… perhaps he has the same watch as I do!

One comment, actually many comments, caught my attention: "What does speed have to do with alpinism?" followed by plenty of other comments that made fun of the alpinist who’s currently the holder of the newest "effort". Yes, because at the end of the day this was an effort, carefully prepared and fueled by a highly able alpinist. Let’s not forget that he’s a serious and well-trained pro who, like many of us less serious, has the passion and possibility to do what he wants to.

I’m below the slope and can’t decide whether to start. I like competitions, those with friends, on pistes dressed in tartan or during those solo climbs in the mountains, against oneself and against those blessed expensive watches. I’ve always followed the "feats" of those capable of making them and I’ve always read those who denigrate them… perhaps this is the beauty of it all, always being jealous and grumpy… perhaps simply with ourselves.

I watched my father leap out of the chair and shout to the winds when the Freccia del Sud raised his finger in Mexico city, a new record, an Italian record! A record destined to be beaten sooner or later, but a record nevertheless… For us the best record of all! I saw Kilian happily reach the finish after having ‘pulverised’ the previous time on the Matterhorn, I saw people who were happy, excited about his gallop, applaud him, ask for his autograph. And in the evenings everyone’s out running, along the pavements in chaotic cities, through lush green meadows or up steep mule tracks, to relax and put themselves to the test, motivated by what they’d seen.

Records are like that, they’re made and bring with them the desire to make them, to beat them, to be beaten. And that’s why I’m here today, to prove to myself that it won’t change anything, except for the beauty of giving it a go. I’m happy about the new record on the North Face, I’m happy and hope that it can be improved on even more; alpinism is like life, a infinite number of different facets, styles and thoughts. I press start and set off, I need to ascend as quickly as possible: today I promised my children I’d take take them to the movies!