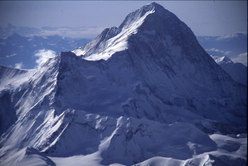 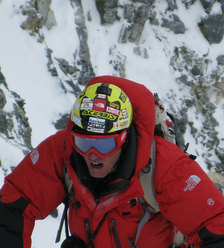 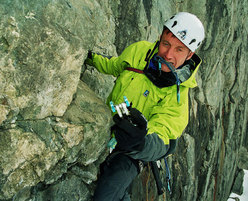 At the end of December Simone Moro from Italy and Denis Urubko from Kazakhistan will attempt the first winter ascent of Makalu 8463m (Himalaya, Nepal), the fifth highest mountain in the world.

Much is still to be done on the 8000m giants in winter. So much so that six out of the 14 still await their first ascent in the cold season. Five are located in Pakistan (K2, Nanga Parbat, Gasherbrum I, Gasherbrum II and Broad Peak) while just one is located in the Nepalese Himalaya: Makalu. And it is this difficult, 8463m high pyramid which Simone Moro and Denis Urubko hope to climb this winter.

As many will remember, Urubko attempted this colossal peak 22 km to the east of Everest last winter together with Serguey Samoilov, Eugeny Shutov e Gennady Durov. The Kazakh team was shut down as the "Great Black Pyramid" and winter pulled out the classic repertoire (read continuous snowfall, ice, storms and intense cold), putting an end to all ascent hopes.

The fifth highest (and possibly coldest) mountain in the world was attempted unsuccessfully last winter by Nives Meroi, Romano Benet and Luca Vuerich as well. The Italian trio remained alone in base camp after Urubko & Co had left for home, but the ice plastered mountain and above all the strong winds convinced them to give up as well.

It was at this point, when descending from ABC, that Nives Meroi's accident occurred. A strong gust of wind made her lose her balance and she fell, breaking her fibula. The situation certainly wasn't ideal. Alone, in winter, half way up the glacier, more than a week's walk away from the valley, things could have turned nasty. Luckily though the weather improved and a helicopter flew to the rescue. This perfect operation was carried out thanks to the ability of the pilots and also thanks to the the Nodo Infinito team coordinated by Manuel Lugli. This just goes to show what a winter expedition in Himalaya can result in, above all in an isolated position such as Makalu.

Winter on Makalu is marked by unsuccessful ascents: in 1980 the Italians Renato Casarotto and Mario Curnis climbed up to 7400m before turning back. 1985/86 was the turn of Reinhold Messner, while in 1987/88 an expedition led by Andrzej Machnik took up the challenge, unsuccessfully. In the winters 1997/98 and 2000/01 expeditions led by Krzysztof Wielicki floundered. The king of first winter ascents (Everest, Lhotse and Kanchenjunga) found conditions on Makalu simply too prohibitive. One must also remember the 2006 solo winter attempt of great Christophe Lafaille. After establishing his final camp at 7600m, the extremely strong French mountaineer set off on his summit push. There has been no trace of him since them.

One thing is clear: Simone Moro and Denis Urubko are about to endeavour on a long and difficult adventure. The two climbers form a strong and close-knit team. Simone in some respects "discovered" Urubko and introduced him to the Himalaya. The Kazakh climber has demonstrated exceptional characteristics as a "battling mountaineer", climbing 13 8000m peaks, including new routes up Broad Peak (2005) and Manaslu (2006) and a great ascent up K2 from the Chinese Face (2008) together with Serguey Samoilov. Moro for his part boasts an impressive mountaineering curriculum. The 41 year old from Bergamo is about to embark on his 40th expedition... while his winter climbs include the first winter ascent of Shisha Pangma (together with Piotr Morawski in 2005) and two consecutive attempts on Broad Peak in 2007 and 2008.

The expedition plans to be ultra light: two mountaineers, no Sherpa, no supplementary oxygen and the intention to use as little fixed rope as possible. The two assume they'll climb via the normal route or the Kukuczka line which Moro had climbed up to 8200m in 1993. One thing is clear: success depends solely on Makalu and the weather conditions. And another thing is certain: it will be intesely cold and extremely difficult. Both know this all to well, and both have the guts and experience to resist. Good luck!