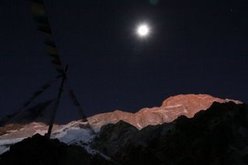 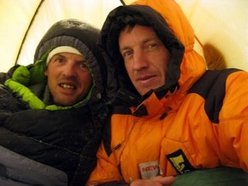 The news is just in: at 14.00 (local time) Simone Moro and Denis Urubko reached the 8462m high summit of Makalu, carrying out the historic first winter ascent of the 5th highest mountain in the world.

"We reached the summit! After 30 years we've finally done it!" Simone Moro could hardly hold back his happiness as he spoke via satellite to his wife Barbara Zwerger. He has good reason to be pleased: his ascent and that of Denis Urubko will go down in history. At 14.00 (Nepal time) today they reached the summit of Makalu, the fifth highest mountain in the world. The ascent is the first winter ascent of this mountain and the 9th 8000m peak to be climbed in winter. Simone Moro is responsible for one of these, Shisha Pangma in winter 2005, to which he can now add Makalu.

As mentioned the two alpinists reached the summit at 14.00 local time, after which the duo descended quickly to their final camp at 7700m from where they had departed during the night. They knew it wouldn't be easy, and they were greeted with the expected. The much-feared icy cold conditions of the Great Black One (Makalu, also known as one of the most demanding 8000m peaks) made themselves felt there, on the summit at 8462m. The gusts of wind probably exceeded 100-120km/h, while the temperature dropped to around 40°C. All things considered, added Moro "It wasn't even that cold..." ;-)

Moro and Urubko set off for this attempt on 6 February. After having reached Camp 1 at 6900m they continued the next day to establish another camp at 7700m. This was already a record in its own right for those you in these 30 years had attempted Makalu in winter. But obviously the two wanted more. The high winds and above all the storms forecast for Wednesday convinced the two to climb quickly, to attempt the summit push, that of happiness. They succeeded fantastically 17 days after their arrival at Base Camp... another speed record in its own right. Now the "problem" is to descend as quickly as possible, a feat these two are certainly capable of. And probably tomorrow they will be able to celebrate the end of the adventure in Base Camp, avoiding therefore the forecast bad weather spell.

Once again Simone Moro and Denis Urubko have proven to be an extremely strong duo. A "extremely lightweight" team which has succeeded in resolving one of the reaming Himalayan problems in fine stile. This comes as no surprise, as the two know each other extremely well. It was Simone Moro who "initiated" Urubko to the Himalaya, back in 2000 with the futuristic attempt to traverse Lhotse - Everest. As all know Urubko then developed into one of the premier Himalayan specialists, with 13 8000m peaks under his belt and two knew routes ascended in the process, Broad Peak in 2005) and Manaslu in 2006...

After this goal, the last remaining 8000m peaks which still await their winter ascent are K2, Nanga Parbat, Gasherbrum I, Gasherbrum II and Broad Peak, all located in Pakistan's Karakorum. But this is another story altogether. Now its time to celebrate this great ascent by Moro and Urubko. We'll wait for them to arrive at Base Camp!