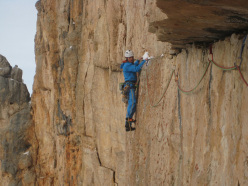 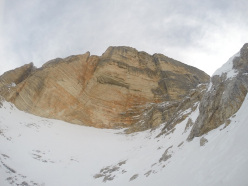 Despite there being little ice in the Dolomites, there are nevertheless countless winter challenges to be had. Proof of this comes from the the South Tyrolean alpinists Simon Gietl and Adam Holzknecht who on 22 and 23 December carried out the first winter ascent of Wüstenblume (400m, VIII+), the route first climbed in summer 2013 up Sass de la Crusc by their friends Josef Hilpold eand Ulrich Viertler.

Gietl and Holzknecht met early on 22 December in Val Badia to start their adventure but since the lift that leads to the base of the mountain was closed due to lack of snow, they drove on to Costallta and continued on foot. After the 3 hour approach they reached the base of the face and, without wasting a minute, started up the route and reached the ledge at mid-height in last light. Here they surprisingly managed to erect a small tent and enjoy a luxurious bivy. "Since it was almost Christmas we had great chocolate biscuits for desert" explained Gietl "while enjoying the splendid view, a heavenly starry night and the sea of lights in the valley below."

The next morning the two South Tyroleans woke late, at 7:30am and after a hearty breakfast started climbing once again, not without difficulty due to the cold. The sun reached the face on the last two pitches and the duo summited without difficulty at 14:00. Neither Gietl nor Holzknecht had repeated the route previously and for their winter ascent they used a mix of free climbing and aid climbing.