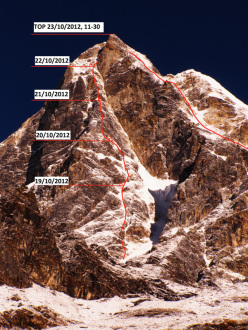 In October 2012 Ukrainian alpinists Serhiy Bublik and Mykola Shymko succeeded in the first ascent of Simnang Himal (also referred to as peak P2), the 6251m high mountain located in the Manaslu region of the Himalaya.

After establishing ABC at 4800m, the two set off on 19 October and, climbing alpine-style up the SE Ridge, summited on the 23rd. According to the climbers – and we have no reason to believe otherwise – the endured "uncomfortable nights , in particular the last one without a tent above 6000m.” The descent lasted 8 hours, some pegs and 5 anchors were left for the abseils. The new 1250m high route is called Redpoint, breaches a variety of different terrain including vertical ice and overhanging granite cracks and receives the difficult overall grade of 6c+, A3, M6, W16.

In the past Simnang Himal was the centre of attention of various Ukrainian attempts, and in both 2007 and 2004 Ukrainian alpinists had been forced to turn back due to poor weather (including Serhiy Bublik). For the record, the peak is more commonly associated with their compatriots Mistislav Gorbenko, Vadim Leontiev, Sergei Pugachov and Mykhaylo Zagirnyak who in 2001 erroneously believed to have made the mountain’s first ascent. In fact, with Bublik and Shymko ‘s recent ascent and new information, it is now clear that they climbed a different, unclimbed peak nearby.